On this day in 1965, Ferguson Arthur Jenkins made his major league debut with the Philadelphia Phillies.

The appearance came in at home and in a relief effort as the Phillies hosted the St. Louis Cardinals and their pitching ace, Bob Gibson.

Jenkins entered the game in relief of Phillies starter Jim Bunning.  He entered the game with the score tied 4-4 and worked 4+ innings helping the team capture a victory in the bottom of the 12th inning. 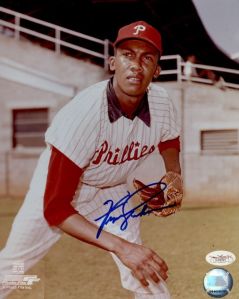