It seems like the stars from the 1980’s really took tim in perfecting their autographs.  In my opinion, some of the best signatures in baseball are from players that solidified their status as baseball royalty during that decade.

Just take a look at how nicely Schmidt puts his signature on a baseball: 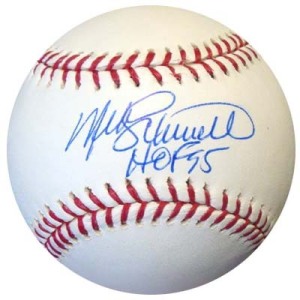 I remember watching the highlights of this game.  The joy that Schmidt shared with us as he rounded the bases while pumping his fists is one of the greatest memories I have of baseball from 1980’s.  Rarely do you see a player emit so much joy during a game, but Schmidt did not hold back and I am thankful that  I was able to enjoy his moment with him.

Schmidt finished his career with 548 home runs which places him in 15th place on the all-time list.

Mike Schmidt Is A 3-Time National League Most Valuable Player

Mike Schmidt Is A 3-Time National League Most Valuable Player

Only ten players in the history of major league baseball have been named a league MVP three times or more.

Mike Schmidt is one of those men!!!

And his numbers from those three seasons are superb.

Mike Schmidt was the offensive force behind the 1980 Philadelphia Phillies and their World Series championship.

After an unimpressive series against the Houston Astros in the NLCS, Schmidt took his game to another level when his team faced off against the Kansas City Royals for the World Series.

In the series, Schmidt hit .381 while collecting 8 hits in 21 at-bats.  He was responsible for driving in 7 runs in the 6-game series, while also scoring six times.  Schmidt had a .462 on-base percentage in the match-up and went on to be named as the World Series MVP. 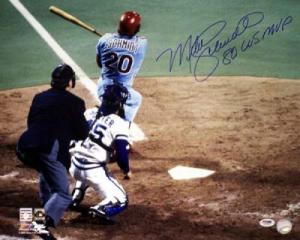 When the discussion of the greatest defensive third baseman in baseball history is brought up, the conversation ends almost always between two players – Brooks Robinson and Mike Schmidt.

Both men were magicians at the ‘Hot Corner’ and their ability to make impossible plays seem effortless put them on a level that no one else has reached.

Mike Schmidt won 9 Gold Gloves for his defensive excellence.  His first win of the award came in 1976.  And he went on to capture the award in 9 of the next 10 seasons.

Mike Schmidt was awarded with the Silver Slugger award 6 times during his playing days with the Phillies.

A dominant third baseman that was known for his power and run producing ability, Schmidt was as feared as any hitter in the National League during the 1980’s.

Schmidt’s first Silver Slugger award came in 1980.  He went on to capture the award in 6 of the next 7 seasons.

Mike Schmidt Is A 12-Time All-Star

Mike Schmidt Is A 12-Time All-Star

Mike Schmidt made the All-Star team in 12 of his 18 major league seasons.  That is a very respectable 66.7% clip.

His first selection came in 1974, just his second full season in the big leagues.  And from there, he would go on to appear in 8 of the next 10 All-Star games.

Schmidt’s final All-star team selection came during his final season in the major leagues – 1989.  A truly fitting way for him to end his professional career.

Mike Schmidt’s entry into the major leagues was far from spectacular.  And far from memorable too.

I have to think that after appearing in 13 games in 1972 that Mike Schmidt had his detractors.  Was he worthy a second round draft selection?  Could he be an everyday player?

I’m happy to see that the Phillies had faith in their 22-year old rookie.  I am not certain that after a debut like that that a club in today’s era would remain on the roster…

That’s right, arguably the best 3rd baseman in baseball’s incredible history is celebrating his birthday as he is 65 years old today!!

Throughout the course of the day we will celebrate Mike Schmidt.  Stay tuned – it will be a fun day!!

On this day in 1996, Barry Bonds joined an elite class of baseball player by becoming a member of the ’40/40 Club’.

On the road in Colorado, and nearing the end of the 1998 baseball season, Barry Bonds swiped the 40th base of his season.  That steal, his last one of the 1998 season, became monumental occasion launching Bonds into another world of player.

As the third member of the group, Bonds’ all-around athletic game put him on par with the other members of the ’40/40 Club’ – Jose Canseco and Alex Rodriguez.