One of my all-time favorite oddball baseball cards from the 1980’s has to be the ‘Drake’s Big Hitters’ cards.

The cards, offered inside boxes of Drake’s snack cakes, were such a fun set to go after as a kid.  And the designs were pretty nice too.

Here is the card of Reggie Jackson from the 1984 set: 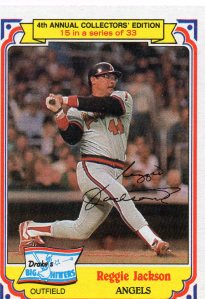 The Drake’s set became a staple set during the mid-80’s and the ‘limited edition’ feel that the set offered led to collector’s gobbling them up (and the snack cakes, too).