On this day in 1974, the Atlanta Braves traded Henry Aaron to the Milwaukee Brewers for Dave May and Roger Alexander.

The aging Aaron was nearing the end of his major league career, and played just two more seasons before retiring in 1976.  Still, he was a huge attraction in the sport, and continued to build on his legendary status while playing for the Brewers. 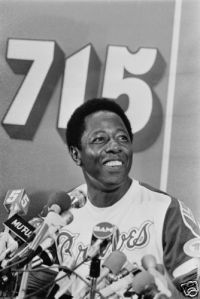