As a crazed collector in the mid-to-late 1980’s and into the early 1990’s, I had some pretty large player collections brewing.

One of which was of Rickey Henderson.  Not only was Henderson one of the best in the game, but he almost always had great-looking baseball cards. 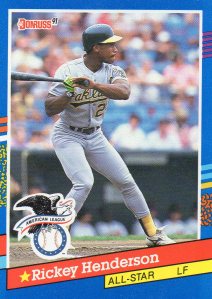 Donruss really knew how to put together an All-Star card – so much better than Topps back in the day!

The card gives us action – not a posed, super-cropped portrait.  It shows us one of the many skills possessed by the player that earned him his All-Star status.