Finally, after showing this set off to you for the last few months, I am done!!

The set was fun to put together, and it also reminded me of how some players in a breakout season can be paired with the sport’s greatest stars on any particular night.

And there it is!!

And just in case you were worried, I have already selected my next subset to build – and I will drop a hint or two next Monday.

Stay tuned.  And thanks for reading ’30-Year Old Cardboard’!!!

It’s a family affair in Baltimore.  1987 was a long season for the Orioles’ manager, Cal Ripken, Sr., but he had to take pride in the play of two of his star infielders.  They happen to be his two sons.

Cal Ripken Jr. is one of baseball’s true superstars.  Last season, he hit 27 home runs and led the Orioles in runs scored (97), doubles (28), and RBI (98).  He was selected to the American League All-Star team for the fifth time.  Cal is also baseball’s Iron-Man.  He has now played in 927 consecutive games.  That is the 6th longest streak of all time.

Billy Ripken was called up from the minor leagues  in mid-season.  He played in 58 games – all as the starting second baseman.  Committing only three errors all season, he wound up with an impressive .990 fielding percentage to complement his .308 batting average.

If Billy can continue to progress as he did this past season, he and Cal Jr. should continue to make their father proud of his Keystone Kids for many years to come.

Two of the National League’s most consistent players of the 1980s have been Keith Hernandez and Dale Murphy.  Between these two superstars,  they have 12 All-Star game performances.

Keith Hernandez, officially named Mets’ team captain in 1987, was selected to his fifth mid-season classic.  His reputation as being a clutch hitter and defensive standout is well documented.  Since 1979, Keith has compiled a .310 batting average and has averaged almost 96 runs batted in per season.  There is no better fielding first baseman in baseball than Keith Hernandez.

The Twins’ Kirby Puckett and Tigers’ Matt Nokes both played key roles in helping their respective teams win division championships.  Such performances was to be expected from a veteran star like Puckett, but was very surprising from a rookie like Nokes.

Puckett’s 1987 season added more fuel to the opinion that he is one of the best all-around players in baseball.  He is one of the few players who can hit for both average and power.  He tied for the American League lead in hits with 207 and placed fourth in the league with a batting average of .332.  He also hit 28 home runs and drove in 99 runs.

Nokes more than adequately filled Detroit’s catching void left by the departure of 5-time All-Star Lance Parrish.  He batted .289, smacked 32 home runs, and had 87 RBIs.  Matt began the season as the Tigers’ DH, but when given the chance, he proved to be a solid backstopper.  My June 1, Nokes was Detroit’s everyday catcher.  Matt was selected to play in the 1987 All-Star game – a high honor for any player, most especially for a rookie. 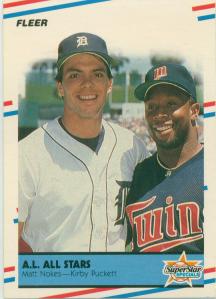 Eric Davis and Darryl Strawberry both entered major league baseball hounded by great fanfare and even greater expectations.  It is a tribute to their ability as players and their strength as men that they both have been able to thrive under such pressure.  In 1987 both enjoyed seasons that propelled them from the status of young player with great potential to the status of superstar.  Both also joined the exclusive 30/30 club of players who have hit 30 or more home runs and stolen 30 or more bases in one season.

Davis batted .293, hit 37 home runs, drove in 100 runs, and stole 50 bases.  He played particularly great in April and May.  His 19 home runs in those two months set a National League record.

Strawberry silenced his critics by posting numbers that speak volumes about his all-around ability.  He hit 39 home runs, stole 36 bases, and drove in a career high 104 runs.  Darryl was at his best down the stretch of the pennant race – earning Player of the Month honors for September. 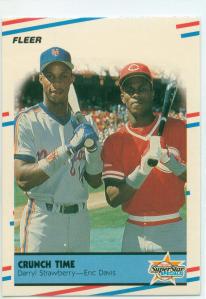 When you talk about National League All-Stars in the 1980s’, you associate third base with Mike Schmidt, and catcher with Gary Carter.

Mike Schmidt will go down in history as one the greatest third basemen of all-time.  In 1987 he had a season that was commensurate with his outstanding career.  Mike batted .293, drove in 113 runs and smacked 35 home runs.  On April 18 he hit the 500th home run of his major league career.  Mike’s career total of 530 home runs ranks ninth on the all-time list.  He has led the National League in home runs a record eight times.  Schmidt is also an outstanding fielder.  He has been honored with a gold glove award ten times.

Carter had a fine 1987 season.  He hit 20 home runs and produced 83 RBIs.  He also hit his 11th career Grand Slam – the most of any active National League player.  Gary is an outstanding defensive catcher and has three gold glove awards to show for it.  He has been selected to play in the All-Star game ten times and has been named MVP of that classic twice.

Tony Fernandez, Cal Ripken Jr, and Alan Trammell are three shortstops that can be considered superstars.  In 1987 all three enjoyed outstanding seasons which measured up to their precedent-setting seasons of the past.

Fernandez rapped 186 hits and batted .322.  Both figures were 7th best in the American League.  He also scored 90 runs, hit 29 doubles, eight triples, and stole a career high 27 bases.  Tony is a Gold Glove winner and this year he led all American League shortstops in putouts.

Ripken, baseball’s Iron-Man, again played in all 162 games, and again produced the type of numbers that baseball fans have come to expect from him.  He hit 27 home runs, had 98 RBI’s, and scored 97 runs.  He was the starting shortstop in the All-Star game, his fifth consecutive selection to the AL squad.