Dustin has a small handful of cards in the new 2014 Panini Prizm baseball card set.

I have been able to grab a few of them, and I will begin to show them off in the coming weeks.

Whenever I do grab a ‘small stack’ at one time, I almost always start by showing off the base card first.

So, sticking with that tradition, here is his base card from the 2014 Panini Prizm set:

I like it.  And with the exception of the missing ‘B’ on his batting helmet, I would say that this card is an A-.

Not bad, but I am also not really sure if I truly know what is going on here…

When I first scanned this card, I thought maybe Pedroia was sliding into third base.  But the more that I look at it, it looks like he is putting on the brakes.  Maybe he is caught in a run-down between two bases and now there is a player with a ball in his glove standing between him and what he thought was his final destination???

The frame may be just 5 foot, 8 inches tall weighing 165 pounds, but the power compacted into the frame is what counts!

And with that power and elite bat speed, Dustin Pedroia can hit the ball – Hard!

Not too shabby for a 165-pound second baseman…

While he may not have long blond hair or wear flip-flops on a daily basis, Dustin Pedroia is a ‘California Boy’.

And this card from the 2014 Bowman set that features the California state flag in the background.  The card is very well done.

And I have to guess that if you showed the featured player a stack of cards and let him choose his favorite, if a ‘State version’ card from the Bowman product was included in the bunch, it would easily get the most votes! 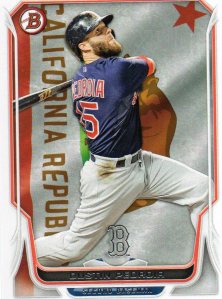 I have to say that of all of the players to not be selected as an All-Star in 2014, it was Dustin Pedroia that I missed seeing the most out on the field with the best in the game.

Does he belong?  Yes.

Are his numbers down a bit this year versus prior seasons?  Yes.

But, Dustin Pedroia is just as deserving as any back-up player on the All-Star roster and I wish that #15 had been out on the field.

I like the great image – very clean, and brimming with nice colors.  The Navy jersey and Gray pants is a look that works!

Lately, I have been bringing home a lot of newly released cards of Dustin Pedroia.

So, I decided to mix things up a bit and show of the oldest card in my stack of cards that I have yet to feature.

Pedroia was the king of the American League in 2008 – an All-Star, a Gold Glove winner, a Silver Slugger winner, and the league MVP.  He did it all.

I’d love to see him return to this form again.  If he can, the Red Sox will only get better as he is the gasoline for that offense.

Yeah buddy, another sweet card of Dustin Pedroia for my player collection.

And another great-looking Gypsy Queen card too!

This time around, it is a mini alternate image card that I have scored for my collection.  Same in size to the other minis from the set, this one offers a different, unique image.

While the Red, Black, and Sepia colored minis may be out of my reach due to the extremely high number of people who collect the Red Sox star, I am very excited to have been able to bring this ‘alternate’ home.

I’ll go on the record with this – I really, really enjoy the 2013 Bowman Platinum baseball card design.

There, I said it!

The cards offer quite a bit, and it appears that the design was thought out well.

Here is the card of Dustin Pedroia from the set:

What I like most is that the card has a lot of neat graphic elements, but none take away from what the image brings to the cardboard.  The way that the identical tubular elements carry up the sides of the card works and it actually forces your eyes to the middle of the card where a solid image rests.

Great job, Bowman.  You won me over with this one!!

The ‘Hometown Heroes’ subset that is part of the A&G brand is a fun one.  I like the thought of the set, and for the most part, the execution is solid.

This is Dustin Pedroia’s card from the 2011 subset: 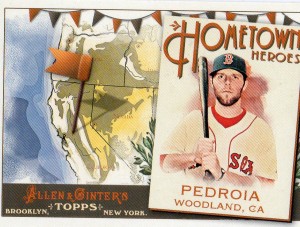 As you can see, there is a flag that is firmly planted in the land in which Dustin Pedroia calls home in California.

Again, I like the theme of the set, and the design accomplishes the theme.

However, I also think it would be neat to see a card featuring some kind of local restaurant sign that reads ‘Home Of XXXXX’.  I think that’d be pretty cool too.

Still, I am digging this card – just offering a glimpse of ‘what could have been’…

Dustin Pedroia 2009 ToppsTown – Can Anyone Tell Me More About These??

I was collecting back in 2009, but I was not going after modern stuff.  Well, let me correct that – I was collecting modern cards of retired legends, just not active players…

So, while I was collecting in ’09, I really have no clue what this ‘ToppsTown’ card or set is all about.  I like the look, and the colors work very well with the Sox uniform that Pedroia is sporting, but I am wondering if this is what Topps was issuing prior to their newer ‘Spring Fever’ sets that have been in the 2013 and 2014 sets.

Can anyone tell me more about this card?  Thank you! 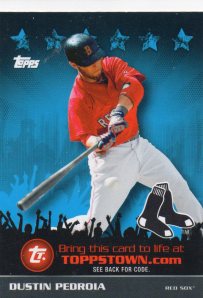