On this day in 1974, Lou Brock stole his 105th base of the season.  This stolen bases gave Brock the single-season record as he eclipsed the 104-mark set by Maury Wills in 1962.

And while this record was relatively short-lived(it lasted just 8 years), this is what catapulted Brock’s status as one of the greatest runners that the sport had ever seen. 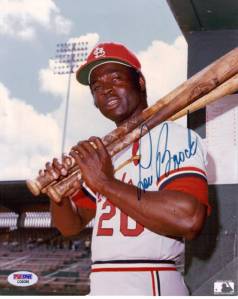 It is not his fault, not by any stretch, but Lou Brock’s rookie card is pretty bad. 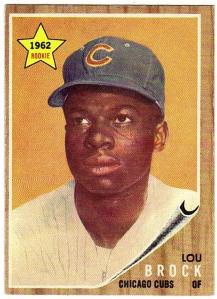 As much as I like the 1962 Topps design, there is no escaping the horrible photo that accompanies Brock’s debut baseball card. It is awful!!

Still, I would love to own one. And yes, I would even take one of the many reprints that have been issued over the last decade+.

Lou Brock And The Hall Of Fame Class Of 1985

Lou Brock And The Hall Of Fame Class Of 1985

Lou Brock was elected into the National Baseball Hall of Fame in 1985. In his first year of eligibility, Brock captured 315 of the 395 votes cast, good for a 79.7% clip. 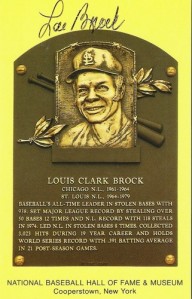 Lou Brock played in three World Series match-ups during his career. He and his Cardinals teammates won titles in the 1964 and 1967 contests.

Brock was exceptional in post-season play. Even when his team lost in 1968, Brock was awesome!

In 21 World Series games, Brock amassed a .391 batting average while collecting 34 hits in 87 at-bats. Of the 87 hits, 7 were doubles, 2 were triples, and 4 were home runs. Brock scored sixteen runs in the Fall Classic while stealing 14 bases and driving in 13.

The Story – At home, and in front of 44,000+ fans, the Cardinals took on their divisional rivals – The Chicago Cubs. Ironically, the Cubs were the team that Brock entered the major leagues with. On this day, Brock made baseball history capturing the 3,000th hit of his big league career. In the game, Brock went 2-for-2 raising his batting average to .326. And while his day momentous for his career and baseball history, it was just as important that his two hits helped the Cardinals win the game 3-2.

Baseball History – The game’s second greatest base stealer of all-time also ranks in 24th place on the all-time hits list with 3,023 career hits. 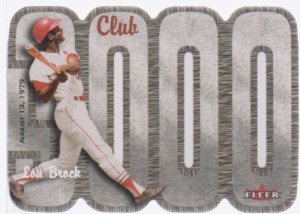 Lou Brock retired from major league baseball with 938 career stolen bases. He was the all-time leader of this offensive category at the time of his retirement.

Brock had double-digit steals in 18 of his 19 big league seasons. His lowest output came in 1962 when he stole just 16 bases. His highest number of steals in a single season was 118 in 1974.

Brock retired with a 75.3% stolen base success rate.

He currently ranks in 2nd place on the all-time steals list and will likely remain in that spot for the foreseeable future. The highest ranking current major leaguer is more than 350 steals behind him…

Lou Brock hit full stride as a major league baseball player right around 1967. His game was peaking on all levels – from hitting, to running, and on-base percentage, Brock was becoming a National League force.

In ’67, he made his first appearance as an All-Star, and he finished in 7th place for the MVP award.

Brock would go on to rank in the Top 15 for the MVP award during seven different seasons. His highest finish would be 2nd place in 1974, behind Steve Garvey of the Dodgers. 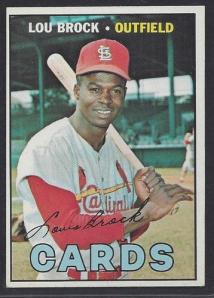 At the peak of his career, Brock had some very solid competition in the National League for a spot on the All-Star roster. He shared crowded outfield space with Hank Aaron, Willie Mays, Roberto Clemente, Billy Williams, Willie McCovey, and Pete Rose.

On June 15, 1964, Lou Brock was traded from the Chicago Cubs to the St. Louis Cardinals.

The transaction also sent Jack Spring and Paul Toth to the Cards in exchange for Ernie Broglio, Doug Clemens, and Bobby Shantz.

While Brock showed flashes of the future with his knack for scoring runs and stealing bases, the Cubs had no idea of the treasure that they traded to their inner-division rivals. Brock possessed all of the tools that a team like Chicago needed – and now he was put in a position in which he would beat them…