While at the show, I found a seller that had a decent sized stack of cards from this year’s Panini Golden Age set.  I’d seen the cards on the web, but not in person so I was eager to check them out.

Ultimately, the set is not for me.  Some of the cards are nice, but there is not enough baseball-related material in the set for me to get excited about it.  Between the other sports, celebrities, and historical figures – I will pass.

But, I was able to grab this card of Sparky Anderson.  I like the look of the card, but I know it would look better if there was a White ‘C’ on Sparky’s cap! 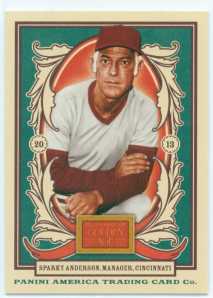 For as much as I like the 1985 Topps baseball card set, I know that not every card in the set can be a ‘winner’.

So, while I think of all of the 1985 Topps baseball cards that I have scooped up since getting back into the hobby a few years ago, I would say that this card of Tigers skipper, Sparky Anderson, is one that is not a ‘stand-out’ card.

For me, it is just way too zoomed-in.  And if you’re going to have a card that features a manager, why not show him either in the dugout or on the mound talking to his club?

I have to imagine that watching a manager like Sparky Anderson go through the process of managing a baseball game from the dugout would be an enjoyable experience.

Between the signals, the chatter, the complaining, and the use of multiple pitchers, I would guess that watching him would at times be more entertaining than the game itself.

Luckily, in 1985, Fleer gave us a small glimpse of what that would be like.

I wonder how a manager like Sparky Anderson would feel about stuff like this??  My guess is that it is not something he would be agreeable to…

For a debut baseball card, I am very impressed with what Fleer gave us with this card of Sparky Anderson.

I am a sucker for cards of players that feature the player waiting in the on-deck circle and when it comes to cards that feature a manager, this one conjures up the same emotion.

When it comes to Anderson’s management style, he was called ‘Captain Hook’ for a reason.  He pulled pitchers from what he would call ‘unfavorable’ situations all of the time.  He was known as not being very kind to the emotions of a relief pitcher and he had a knack for yanking poor-performing pitchers in the middle of facing a batter – regardless of the count.

In this image, I imagine that he was getting ready to spring up and make another call to the ‘pen.

This card of Tigers’ manager Sparky Anders on is way too zoomed in for my liking.  And while I cannot imagine that Sparky was the most accommodating person when it came to taking direction from the photographers, I do think that the person that snapped this shot could have positioned themselves better… 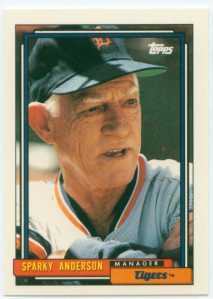 As for the 1992 baseball season, the Tigers did not fare too well with Sparky at the helm.  The team finished in last place in the division with a record of 75-87.  It was a far cry of their 2nd place finish in 1991.

Of all of the multi-player cards issued over the years, it is the manager’s card that I care for the least.

Actually – let me say that differently, I REALLY DON’T LIKE THESE MULTI-MANAGER CARDS!!!!

Imagine yourself as a team collector, a team set builder.

And let’s say that you are working on the 1993 Topps Detroit Tigers team set.

And this is your manager card for the set:

“Laid back, with my mind on my money and my money on my mind”.

Gotta love it!  Of all of the images that Topps could have chosen of Sparky Anderson for their 1990 Topps set, they went with one in which he appears to not really be doing anything at all.

They could have given us one with him chatting with players or arguing with an umpire, but instead we got one of him sitting back, somewhat relaxed.

As for the 1990 baseball season, the Tigers were 79-83 with a .488 win percentage.  They finished in third place in their division in 1990, and I have to guess that capturing Anderson this relaxed during the 1990 season was a rare occurence.

One of the things that I most remember about watching Anderson as a manager was that his body language almost always reflected his mood.  He was not one to hide how he felt.

And in this shot, used on his 1989 Topps baseball card, it looks like he is not too happy as he peers at someone on the bench for the Tigers.

The 1989 baseball season was a mess.  Finishing in last place for the first time in his eleven years with the team, Anderson’s Tigers team was 59-103 finishing the season with the most losses in major league baseball.

Now I know why Sparky was so upset….

I am a big fan of the 1987 Topps baseball card set.  As a kid, I built a handful of these sets and hade more than enough doubles, triples, and quadruples to fill my player collections as well.

As for Sparky Anderson and his Detroit Tigers team, the 1987 baseball season marked Sparky’s tenth season as the skipper of the club.

How did they reward him for the anniversary??

With a 1st place finish in the American League East, of course!! The Tigers went 98-64 during the ’87 campaign.  The Tigers would lose to the Minnesota Twins in the LCS. 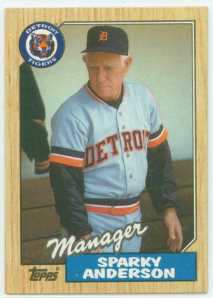 ‘Come on Sparky, show us those pearly whites’, said the photographer.

In 1991, the team was finally able to get into the positive, posting a record of 84-78, good for a winning percentage of .519 and second place in the American League East.

And Sparky was once again smiling…