Category Archives: Stars from the 80’s

A very simple question – or so you thought…

I picked up this card a few weeks ago and am having a little trouble deciding how to organize it into my collection.  I am not a ‘collector’ of either of these Hall of Famers at the present moment, so as it relates to my collection, I have no preference.

Let me show you the conundrum that I am in.

Issued by Upper Deck in 1992, the card pays tribute to both players collecting the 3,o00th hits of their major league careers.

Designed with a very attractive background, the front of the card looks like this:

And, now here is the back:

See the pickle that I am in???

What would you do???

Posted in Stars from the 80's, Uncategorized

Wow, would you look at those curly, curly locks on the top of Yount’s head.  If it entertains me, I have to wonder what the Hall of Famer thinks when he sees pictures of his hair from his early playing days…

Just 1 of the many reason that I love these reprint cards – Memories!!

One of the most respected players from his era, Larkin was as classy of a player in the league as there was during the 1980’s, 1990’s, and into the 2000’s.  A 19-year veteran who spent his entire career in Cincinnati, Larkin was the centerpiece of the Reds’ team and their lone constant.

Larkin’s abilities were endless.  Solid hitter, great defender, base stealer, home run hitter…  Larkin excelled at each and every aspect of the game.  In his best season in 1995, he won the MVP award.  In that season, Larkin hit .319 while collecting 158 hits, 98 runs, 51 stolen bases, 66 RBI, 15 home runs and the Gold Glove and Silver Slugger awards.

Barry is up for round number 3 of voting for his election into Baseball’s Hall of Fame this year, and for his birthday I give him my vote!  I don’t think any other gift would be as fitting!!! 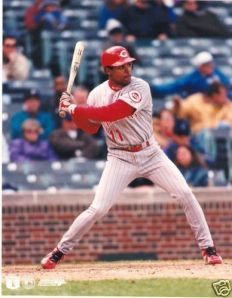 Posted in Birthdays & Anniversaries, Stars from the 80's

But that is one of the things that I love most about collecting – the memories a baseball card will bring back!!!

There are some legendary players in this sport that are synonymous with being on a single team.  But that is just not the case…  Lou Brock, Ryne Sandberg, and of course Steve Carlton!!  This card offers up a great glimpse of baseball history!!!

I don’t collect Roger Clemens baseball cards.   I don’t plan on starting a Clemens collection either.  But that doesn’t mean that I don’t respect what he did on the mound during his major league baseball career.

Easily one of the greatest pitchers of my generation, Clemens had an incredible career.

And when I saw this card from the 2006 Allen & Ginter set, all of those memories of watching Clemens pitch for the Sox in the 1980’s and into the 1990’s came flooding back into my memory – he was AWESOME!!!

A&G, Thanks for the memories!!! 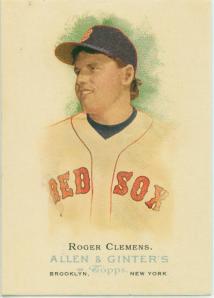 A very sweet looking card from a very under-appreciated set…

This card, from the 200 Fleer issue titled ‘Greats Of The Game’, is a beauty!  The photo shows Schmidt watching the ball fly off his bat, and it makes me wonder if he connected for one of his legendary longballs on this very swing.

One of the great elements of the card is the strong border color.  And while not an exact match for the Burgundy of the Phillies’ uniform, it is still a very nice complimentary color.

And while the scan may not show you all of the details, the Fleer GOTG logo in the upper left-hand corner of the card is pretty sweet too!!

Posted in Mike Schmidt Collection, Stars from the 80's

On this day in 1989 Jim Abbott made his major league debut with the California Angels.

Prior to this day, Abbott had already conquered Little League, High School baseball, Collegiate Baseball, and even The Olympics.  Yet this day stands alone.  On this day he stood toe to toe with the best baseball players in the world and was their peer.  Disability or not, he made it to the major leagues defying odds and hurdling obstacle after obstacle that was thrown his way. 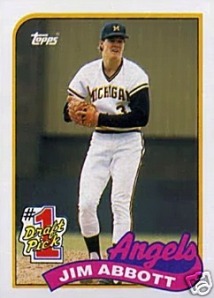 And while my preference would be to own the original, I will settle for the reprint issued 35 years after its debut. 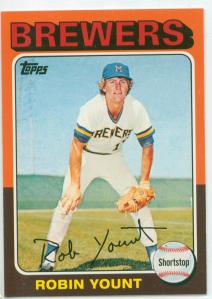 I like Robin Yount as a player –  his numbers are strong from start to finish.  I have to wonder how much bigger of a star Yount would have been had he not called Milwaukee his baseball ‘home’ for the duration of his career.

Oh well, at some point Robin Yount will be added to the ’30-YOC’ roster.  And then I will go after getting the 1975 version.  But for now, this will work!

﻿Andre Dawson was recently being interviewed on the local sports radio station.  The topic of the conversation was the very young, and very talented Florida Marlins outfield.

Dawson was excited to work with the guys, and I have to imagine that having one of the best defensive outfielders from the 1980’s as your mentor is a pretty sweet feeling for Logan Morrison, Chris Coghlan, and Mike Stanton.

When discussing Stanton, Dawson was asked what player was he reminded of most while watching Stanton play.  The answer?  Jose Canseco.

According to Dawson, Stanton, like Canseco can take the game to another level.  Extraordinary athleticism with dynamic power – the sky is the limit.

Just like it was for Jose Canseco…  I have so many wonderful memories of watching the original member of the ’40/40 Club’ while suiting up for the A’s.

Such a great card – and sweet addition to the collection as well!!

Of all of the players that are eligible to be members of the Baseball Hall of Fame class of 2012, I expect that Barry Larkin will get the highest number of votes.

And with no true contender for the ‘first ballott’ title eligible in 2012, Larkin may be the headliner as well…

I like Larkin, I always have.  You have to respect a player of his abilities that stayed loyal to a single franchise throughout a very lengthy career – a career that saw salaries and free agency boom.

I am very happy to have found this card.  And, hey, is that Wrigley Field in the background??