By all accounts, this was the hardest card for me to capture of Joe Morgan.

The 1972 Topps set issued a ‘high numbers’ kind of set, later known as the ‘Traded’ sets that we enjoyed during the mid-1980’s.

What these high-numbered, and short-printed cards allowed the company to do was issue cards of players on new teams as well as players that debuted after the ‘base’ set was printed.

So, what this all means is that this is the first major brand release of Joe Morgan in a Cincinnati Reds uniform.

And while the card is missing the team name in the top banner area, as you find on the ‘base’ set, here we finally see Joe decked out in his White and Red, Reds uniform. 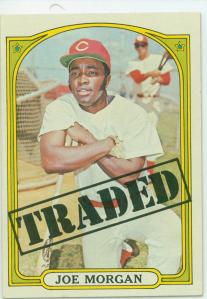 I am so thrilled to finally own this card.  I shopped for a very long time for this one – and I finally found a great one in very good/excellent condition that fit my budget!!!

I love the thought of the ‘In-Action’ themed baseball cards that Topps produced a few decades back.

The best part about the ‘In-Action’ cards??  They were bonus cards, as each player in the set was also represented with a ‘base’ card.  For a player collector, that is baseball card heaven!!!

It’s just really bad that Topps used a photo like this one of Ron Santo:

One of the most popular and fun-to-watch Chicago Cubs players of all-time, and this was the image that they used to show him ‘In-Action’??  Very disappointed in the effort, but thrilled to add a new card of Santo to my collection that honors his legendary baseball career!!! 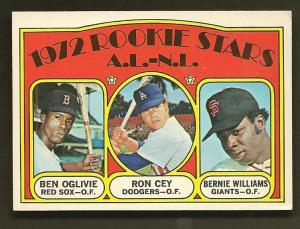 Ben Oglivie – A 16-year veteran that was a solid contributor for the Red Sox, Tigers, and Brewers, Ben Oglivie had a nice career as a big league player.  An outfielder that could play either in left or right, Oglivie solidified his role with his solid all-around play.  Oglivie was a 3-time All-star.  In his best season, 1980, he finished in 13th place for the MVP Award with his .304 batting average, 41 home runs, and 118 RBI.

Bernie Williams – Williams played for 4 seasons in the majors.  During that time he appeared in 102 games for the Giants and Padres.   A utility outfielder, Williams spent time playing all three spots.  Williams compiled a .192 batting average during his career while collecting 33 hits, scoring 23 runs, smacking 4 home runs, and striking out 53 times.

I was able to grab this 1972 Topps Fergie Jenkins card for a very low price and am surprised as to how great the condition of the card is in since it’s 37+ years old!!

While the ’72 Topps set is not on my ‘favorites list’, it’s nice to add another of the missing pieces to my Fergie Jenkins player collection.  Now I am just 2 cards away from having every Fergie Jenkins card issued during the 1970’s.  I am hoping to wrap up this decade’s set of cards within the next few weeks.

For me, the ’72 design screams ‘Disco’.  And although that may be premature by a few years before  the disco craze hit the US, the color scheme and graphic details certainly are reminiscent and should remain in the 70’s.