Notes From The 1975 Season:  The Cincinnati Reds were an offensive powerhouse in 1975.  Led by three future Hall of Famers and several other top-notch hitters, the Reds scored a ton of runs, 840 to be exact which was 254 more than their opposition.  The Reds had a record of 108-54 in 1975, winning their division by 20 games.  The dove into the playoffs full of steam and wound up winning the World Series 4 games to 3 over the Boston Red Sox.

During his 18 year career as a player in major league baseball, Willie Randolph could be classified as an ‘Unsung Hero’ for the teams he played on. 13 of his 18 seasons were played as a member of the New York Yankees and it was very easy to be overshadowed by the many dominant personalities on their roster. But Randolph handled the pressure of playing in New York very well and excelled as a second baseman for the ‘Bronx Bombers’.

As a 6-time All-star, Randolph finished his career with a .276 batting average along with 271 stolen bases and ,1239 runs scored. He competed in 4 World Series match-ups and won the championship with the 1977 New York Yankees.

Notes From Career:  An excellent defender, and speedy base-runner, Geronimo used his speed to anchor center field for the Reds while also providing a great source of run production while on offense.  During his 9 seasons in Cincinnati, Geronimo scored 404 runs while also stealing 72 bases.  He also won four consecutive Gold Glove awards from 1974-1977.  Geronimo won two World Series championships as part of ‘The Big Red Machine’.

Notes From Career:   Noted as a defensive specialist, Plummer was a great back-up player.  His solid play behind the plate kept him employed as a major league player for 10 seasons.  Offensively, Plummer struggled.  A career .188 hitter, he never had more than 38 hits in a season.  Bill Plummer was on the Reds’ roster for both the 1975 and 1976 World Series contests.  He did not see any playing time in either. 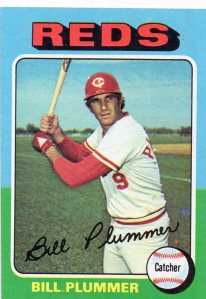 Notes From Career:  A journey-man, Norman suited up for 7 teams during his 16 year major league career.  He has a lifetime record of 104-103 with 56 complete games, 15 shutouts, and 8 saves.  Norman was a member of the ‘Big Red Machine’ pitching staff and won World Series titles in both 1975 and 1976 with the club.

Notes From Career:  Rettenmund won two World Series titles during his career – 1970 with Oakland and 1975 with Cincinnati.  He has 629 career hits and a lifetime batting average of .271.  Rettenmund was a solid fill-in guy for the outfield – he played 442 games in right field, 229 games in left field, and 155 games in center field. 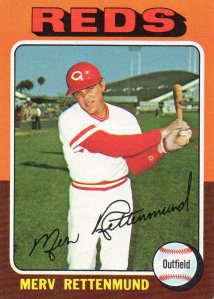 An exceptional ball player, Willie Stargell was dynamic on offense.  He has a lifetime batting average of .282 with 2,232 hits.  His power numbers are solid as he smashed 475 home runs and 423 doubles.  He also scored 1,195 runs during his career while driving in an additional 1,540.