Some of the duos that Topps pairs together for these kinds of cards makes little to no sense.

And some of them are almost perfect fits.

This duo of Johnny Bench and Brian McCann are closer to the ‘perfect fit’ side than the opposite.

Johnny Bench is often called the greatest catcher to have ever played the game.  And while I feel that he has a few challengers to that top spot, he certainly does deserve to be ranked at number one.

As for McCann, he is truly the leader of the Atlanta Braves team.  He is a solid defender, perennial All-Star, and one of the better offensive catchers in the game today.

While McCann is no Johnny Bench, he is among the elite catchers in the sport today.

Wow, another work of art.

And a card that I have never seen before buying it…

Take a look at this sweet piece of cardboard: 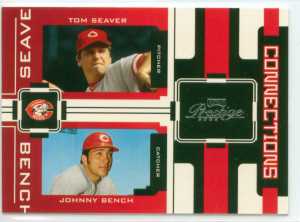 Two of the best players of the 1970’s captured together on one card.

And the fact that they both called the Cincinnati Reds their team, and at the same time as well, is simply icing on the cake.

Are there any other ‘Connections’ cards out there that are this nice???

Now this is how you represent a baseball great on a piece of cardboard. 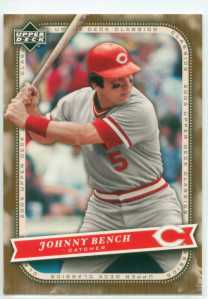 Upper Deck did it right with their 2005 Classics release.  From the simple design to the great choice of player to the perfect photos.

And for this one, they did something to really make that Red coloring pop – it looks fantastic!!!

These two baseball players dominated their positions and leagues for many, many years.

It’s just a shame that the card is not more appealing to look at.

And since I have yet to declare myself a Tom Seaver collector, this one will happily rest in my Johnny Bench collection.

You know, looking at the card does make me wonder what these two were up to when this photo was taken…

This is Johnny Bench’s card from the debut Fleer set of 1981. 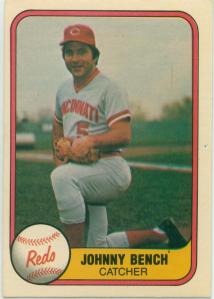 And while the card is far from ‘beautiful’, I have to say that there are many more cards in this same Fleer set that are not as appealing.

Something tells me that Bench held this same pose as an 8-year old Little Leaguer in Oklahoma….  🙂

So, when a modern card is issued using the same design as that one that was created almost thirty years ago, I always take a second glance.

And if during that second glance I see a player that I like, or collect, I almost always go after it.

And that is how this card of Johnny Bench from the 2001 Topps Archives set landed in my collection. 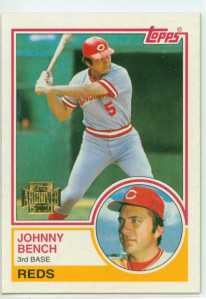 And I am glad that it did.  Very glad, indeed!

Very far from spectacular, this card from the 1984 Fleer baseball card set does Johnny Bench no justice at all.

And while Bench did not make an appearance during the 1984 baseball season, it amazes me that they would select a picture like this for their set when the guy still offered us quite a bit to watch and enjoy on the ball field during the 1983 season.

So, instead of giving us one more glimpse of the great Johnny Bench, we get this:

I really, really like the theme of this baseball card set, I just wish that the execution of the design was more to my liking…

Johnny Bench is often mentioned as being the greatest catcher in major league history, and he may very well be.  So, when honoring ‘The National Pastime’ with a card that features one of its greatest players of all-time, I guess I just want more.

If you had to rank the greatest catchers of all-time, how would that list look???

I know for a fact that my top two wound be Johnny Bench and Yogi Berra.  Selecting the #1 player out of those two would be tough, but I think Berra gets the nod for his lengthier consistency, and postseason success.

And while I already owned each of these for both my Billy Williams and Tony Perez collections, these two fill voids in my Johnny Bench collection!!!

And they are both in Excellent condition.

I am a big fan of League Leader baseball cards – I find them to be a very nice way to celebrate seasons that have passed while also paying homage to some incredible feats.

These three guys really dominated the NL in 1971!!!