I am very excited to add another Vince Coleman rookie card to my collection.

Vince was one hell of a player during his early days as  a member of the Cardinals.  His speed and skill on the base paths set him apart from almost everyone else in the sport.  And had it not been for a very special player named Rickey Henderson, Vince Coleman could possibly be the best runner from the 1980’s.

It’s just too bad that Fleer did not capture the essence of Vince in the same manner that Topps did in 1985. 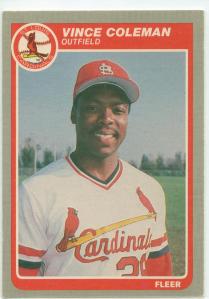 Posted in Stars from the 80's, Vince Coleman Collection