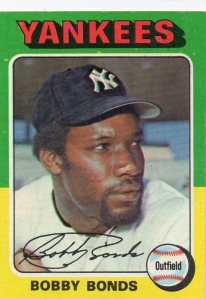 Bobby Bonds will almost always be first thought of as being the father of Barry Bonds.  And while that may be his preference, the numbers he put up during his major league career are certainly worthy of being mentioned.

Bonds played in the big leagues for 14 years.

Bonds was named an All-Star three times and he also captured three Gold Gloves for his excellence in the outfield.

In 14 major league seasons, Bonds made it to the post-season just once time.  In 1971, Bonds and his Giants teammates were eliminated by the Pirates in the first round of the playoffs. 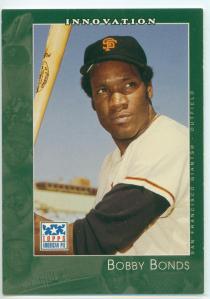 Has baseball’s 300/300 club lost it’s luster?  In 2006, just 10 days apart from one another, this extremely rare club added 2 new members: Steve Finley and Reggie Sanders.  The club had grown by 50% in a matter of weeks and although there are only 6 players in baseball history  that have achieved this incredible accomplishment I have to wonder if the brilliance of this feat has been reduced?

Don’t get me wrong, Finley and Sanders are wonderful players that contributed to their teams with both power and smart base running.  This is a rare kind of player, and when mentioned alongside the other members they tend to stand out(not in a good way).  Barry Bonds, Willie Mays, Bobby Bonds, Andre Dawson…  and oh yeah, Steve Finley and Reggie Sanders.  By adding a 2-time All-Star and 1-time All-Star to this group of current Hall of Famers and sure to be future Hall of Famers(Dawson & Bonds) just doesn’t sit well with me.  Players like Carlos Beltran and Mike Cameron are closing in on joining the 300/300 club too and again they just don’t fit in with the original 4 members in my eyes.

Amazingly enough, the 4 original members of this club are also in the 400/400 club.  This is a true testament to their ability to display the perfect combination of power and speed throughout their careers.

So, now I ask the question is 400/400 the new 300/300?  You always hear that 50 is the new 30, and 60 is the new 40 so I am throwing that into the world of baseball as I believe 400/400 is the new pinnacle for the perfect match of power, speed, and durability.  I don’t want to take anything away from Finley or Sanders, but I also wouldn’t want to diminish these other 4 baseball superstar’s accomplishments either.

And now I have to wonder who may be next to join them.  There is a handful of talented players out there that could come close, but this 400/400 goal also shows that a player is able to stay healthy and committed to the game.

In my eyes, there is only 1 player that may be able to join this newly crowned elite 400/400 club in the next 10 years.  Ladies and Gentleman, I give you 6-time All-Star Alfonso Soriano.

As of games played through August 17, 2008, Soriano has 263 career home runs and 241 career stolen bases.  If he is able to maintain his health, which is questionable, and continues to average the stats he has compiled in his first 9 years as a professional baseball player, we may be seeing history made again in 6-7 years.