Shout-Out to loyal reader and friend of the blog, Q, for the donation of this baseball card.

The card is from the 2012 Topps Archives baseball card set.  And it is actually a sticker from the ’77 Cloth Stickers’ subset.

I’m working on completing this set, and this Cliff Lee card from the set gets me one step closer.

Lee is off to a great start to his 2013 baseball season – and as a guy that watches a lot of National League East baseball, it is nice to see him rebounding from his 2012 season.

With 49 Strikeouts In The Phillies/Diamondbacks Series, The Contest Winner Is…

With 49 Strikeouts In The Phillies/Diamondbacks Series, The Contest Winner Is…

And now, these cards are yours:

Thanks to everyone that played.

And please stay tuned – I am working on a special treat that will be announced in the coming days.

The Players & Their Picks – Track The Strikeouts Contest!!!!

The Players & Their Picks – Track The Strikeouts Contest!!!!

Thanks to all that participated.  I truly believe that this will be a fun one too!

The Phillies and the Diamondbacks square off in the first of three games tonight, so stay tuned to those boxscores to see who gets the early lead in this 3-game contest.

Here is a list of the player and their picks:

And don’t forget, the player that comes the closest to the total number of strikeouts, without going over,  from this 3-game series will win this: 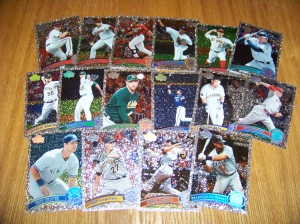 Now that, my dear friends, is a very healthy stack of baseball cards!!!

Good Luck to you all!  The winner will be announced Wednesday evening once Game 3 is in the books.

This contest will take us all to the wonderful state of Arizona, where the Diamondbacks will be hosting the Philadelphia Phillies for a 3-game set on April 23, 24, and 25.

The two teams feature some of the best arms in the National League, and I am predicting that there will be a lot of K’s during that set.

To be entered into this contest, simply predict the total number of strikeouts that you think will occur during this 3-game series.  The player that comes the closest to the actual number of strikeouts, without going over, will win.  And a number is selected it cannot be used again, so pick wisely. 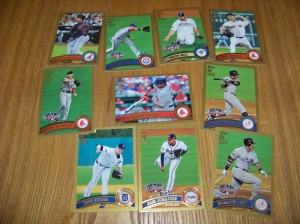 And we’ve got base:

You want the prize?  Then make your selection!!!

I will take all entries up until 11:59 PM on Saturday night, so make your picks now!!!

Just days removed from the end of the 2011 major league baseball season and just days into the start of the playoffs, I am still very excited by all of the great action and performances we got to witness during the year.

So, here are my ‘Top Ten Surprises From The 2011 Baseball Season’:

10 – Lance Berkman’s climb back to dominance and defensive presence after moving back to the outfield after many years as a first baseman.

9 – Roy Halladay’s ability to convert on a sacrifice.  In just his second season in the National League, Halladay converted 16 sacrifices, up from 2 in 2010.

8 – Ryan Braun’s chase for the batting title.  We all know that he is a superstar, and an all-around offensive weapon.  His .332 average is twenty points above his average – and his power numbers did not suffer one bit!!

7 – Matt Kemp’s emergence as a 5-tool player.  Kemp was the only real threat for the Triple Crown in 2011.  And when mixed with his success on the base paths and in the field, Kemp is building a solid career for himself. 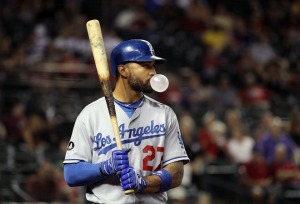 6 – Victor Martinez’s ability to dominate.  On a roster full of young and incredible talent, it was V-Mart that rose to the occasion more often than his teammates.  With .330/12/103 on stat sheet, Martinez was the fuel to Detroit’s engine.

4 – Craig Kimbrel’s 46 saves – a rookie record.  Kimbrel was unreal for the Braves – and his 127 strikeouts in 77 innings pitched is the perfect recipe for a great closer.

3 – Dan Uggla’s 33-game hit streak.  It’s very rare that a slugger has the patience to put together a hit streak of this kind.  And while this was considered a ‘down’ year for Uggla as it relates to total hits and batting average, his 33-game hit streak was the league’s best of 2011.

2 – Curtis Granderson’s ability to compile stats like the big-boys.  We’ve all known that Granderson was a highly skilled player – but to do what he did in one season is remarkable.  1st in runs scored, 1st in RBI, 2nd in home runs, and 2nd in triples makes a strong argument for the AL MVP. 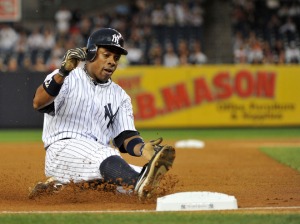 And there you have it – my ‘Top Ten Surprises From The 2011 Baseball Season’.

Did I miss anything?  Let me hear it!!

And next week, we’ll take a look at my ‘Top Ten Disappointments From The 2011 Baseball Season’.

As you probably know, I watch a lot of baseball.  I would say that 4-5 nights a week, I am tuned into a game, or two if possible.

My team of choice is the Florida Marlins, but I also watch a lot of Rays baseball as well as anything aired by ESPN, especially on Sunday night.

And now with three no-hitters already under our belts for the 2011 season, I thought it would be fun to tell you the ten guys I would really like to see toss a ‘No-No’.

First let me say that Roy Halladay, Justin Verlander, and Matt Garza are not on the list.  I’ve already seen them make baseball history so I know what that looks like. 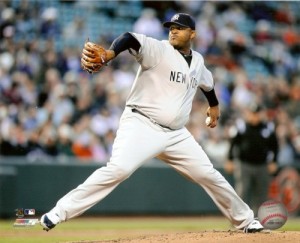 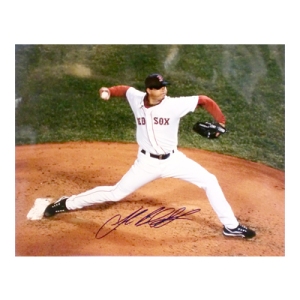 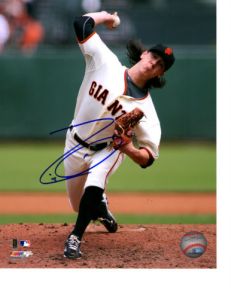 And there you have it.  Did I miss anyone that you would have added to the list??

Did You See What Cliff Lee Said To Carlos Ruiz???

Did You See What Cliff Lee Said To Carlos Ruiz??? 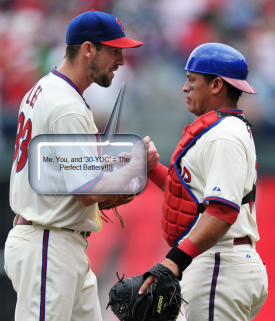 Posted in Did You See...

Would’ve been real disappointed if it hadn’t been such a great matchup (Johnson vs. Halladay).

Other: Wilson Valdez and Jose Contreras also signed, but I didn’t need them.

Bring On The Phillies!!!

Bring On The Phillies!!!

OK, maybe this is not the best approach, but why not go into Philadelphia with a team that is full of confidence in their ability to win?

The Marlins are coming off of a series in which they won 2 out of 3 games from the Braves, and the team’s offense is clicking.  In fact, they’re winning games and scoring runs without the aid of Hanley Ramirez and Mike Stanton.  If those two guys can turn it on, maybe, just maybe ‘The Fish’ can continue their winning ways…

My fingers are crossed, but the opposition is real tough.  And while we’re not facing Roy Halladay or Cliff Lee during this road trip, the challenge of Roy Oswalt and Cole Hamels is not a cake-walk either…

My fingers are crossed.  GO FISH!!! 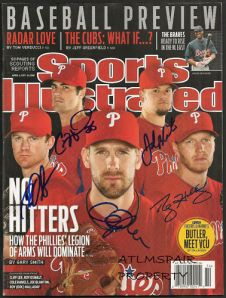 Like many of you, I have been tuned in to what has been a fantastic baseball playoff season.  And while the results of several of the series that have concluded so far did not match what my crystal ball stated, I figured that I may as well offer up my prediction to you as to who I think will win this match-up.

If you told me back in April that the final two teams standing in October would be the San Francisco Giants and the Texas Rangers, I would have laughed at you.  But truth be told, both of these teams are incredibly hot right now and I think that his series will be very fun to watch.

I expect a lot of close contests, and I think that several of them will end with late inning heroics.

And after watching several of the games from both the division and championship series’ of each league, my prediction is that the San Francisco Giants will with the World Series in 6 games.

Sometimes you just see a team click in every way possible as they pick up win after win the a ‘normal’ team does not.  When watching these playoffs, that team is the Giants.