The Fergie Jenkins Foundation has just added NHL legend Eric Lindros to their already impressive line-up for this month’s signing.

Here are the details:

Amd just in case you missed it, here are the details for the former MLB’ers:

Please Mail Items & Payment (Checks
payable to the The Fergie Jenkins Foundation) to:

*Please include SASE for return shipping

The headline says it all.  And here are the details:

Please Mail Items & Payment (Checks
payable to the The Fergie Jenkins Foundation) to:

*Please include SASE for return shipping 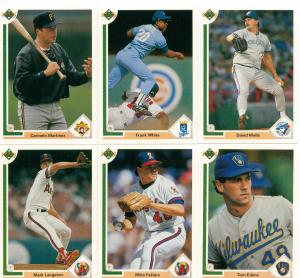 As I surfed through a few 3200 count boxes labeled $0.25 on the outside, I became a little nostalgic.

While not letting my emotions take control of my wallet, I did manage to pull these three rookie cards from the 1980’s of guys that left a lasting impression on me during my youth.

Dave Stewart – One of the most intimidating guys I have ever seen on the mound.  His look of concentration, mixed with intimidation, left me shaking in my Nikes when I was watching him pitch for the A’s.

Bret Saberhagen – Saberhagen won the Cy Young award in both 1985 and 1989.  I distinctly remember him winning the award in 1985 and when he did it again in ’89, I was surprised and a little shocked that he was that good.  This of course was before Maddux, Clemens, and Randy Johnson became elite pitchers and set a new standard…

Julio Franco – That batting stance stood out like a sore thumb in the mid-80’s and I can still picture it vividly today.  Before Jerome Walton and Junior Felix and Chris Sabo, it was Julio Franco that I was impersonating in the street when the neighborhood kids got together to play ball.

Posted in Baseball Card Shows, Stars from the 80's

Dave Stewart of the Oakland A’s and Fernando Valenzuela of the Los Angeles Dodgers both threw no hitters in 1990 – on the same day(June 29). 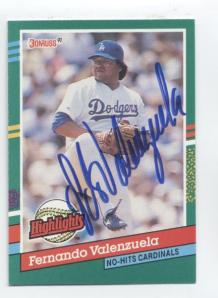 My take – I do remember this.  And at the time, I thought that this was a pretty cool day for the sport.  19 years later, I appreciate these two guys a lot more and consider this to be one of the most historic days in the sport that I have enjoyed during my lifetime.

Ah, the old Honorable Mention award.  You never want it, but are still happy when recognized for your efforts.

My ’40/40 club’ couldn’t cover all of the rookies that debuted during the 1980’s so here are a few guys that just missed the cut.  A few more bounces of the ball in their direction and they may have been in, but for now thery are on the outside looking in.

Matt Williams – A solid offensive threat with a knack for hitting home runs.  Williams has 378 career homers to go with his 1,218 RBI.  His low batting average of .268 does not do him justice as he was a constant threat for most of his career.  Williams finished in the Top 6 for the MVP award 4 times with his best finish coming in 1994 at second place.  Williams is a 5-time All-star, 4-time Silver Slugger winner, and 4-time Gold Glove winner.  He won a World Series title in 2001 with the Arizona Diamondbacks.

Kirk Gibson – ‘Gibby’ is best known for one of the greatest World Series home runs in baseball’s tremendous history.  His resume includes 1,553 hits, 255 homers, 870 RBI, and 985 runs scored.  Gibson won the MVP award in 1988 en route to taking his LA Dodgers team to the World Series.  Gibson has won 2 championships – 1 with the 1984 Detroit Tigers and another with the 1988 Los Angeles Dodgers.

Dave Stewart – The man with the most intimidating presence on the mound, Dave Stewart was a classic pitcher who could have been just as dominant in the decades that preceeded him.  ‘Stew’ has 168 career wins which includes 4 straight 20-win seasons.  Stewart finished in the Top 4 for the Cy Young award in those 4 seasons as well.  Dave Stewart is a 3-time World Series champion.  He won titles in 1981 with the Dodgers, 1990 with the Oakland A’s, and then in 1993 with the Toronto Blue Jays.

Joe Carter – Carter is another player known for 1 swing of the bat versus his entire body of work.  Carter’s work was impressive and with career stats like 396 home runs, 1,445 RBI, and 2,184 hits, it’s easy to see that Carter is more than a ‘1-trick pony’.  Joe Carter finished in the Top 20 for the MVP award 8 times.  He is a 5-time All-star, 2-time Silver Slugger winner, and a 2-time World Series champion.

I’ve been looking for one of these ever since I scored this lot on Ebay a month ago.  I was only able to find 1 of these and hope to add a few more at some point in the future.  Of all 3 Dave Stewart rookie cards from 1982, I think that the Topps version is by far the most superior design.

Posted in Baseball Card Shows, Stars from the 80's

Man does this bring back memories…  Some of the players that are shown during this introduction are the reason I love baseball.

Nolan Ryan, Rickey Henderson, Cal Ripken Jr, Dave Stewart, and the list goes on!!!  I wish today’s game had more players that captured my heart the way these guys did!!

Posted in Baseball Commercials/Videos, Stars from the 80's

What a great commercial…  This 60-second spot brings back so many memories for me.  I remember watching most of the highlights in this clip live as a kid.

I don’t know if I could pick my greatest memory…  Can you???

Posted in Baseball Commercials/Videos, Stars from the 80's

Dave Stewart would scare the crap out of me…

I don’t know about you, but there are certain images from baseball in the 1980’s that are burned into my mind.  In 1988 when the Los Angeles Dodgers played the Oakland A’s in the World Series it was Dave Stewart’s fierce stare.  When the popularity of the forearm smashing ‘Bash Brothers’ was at an all-time high.  When Kirk Gibson created a moment in World Series history that continually gets air time some 20 years later.  Dave Stewart still scares the crap out of me…

I don’t know if it was that his hat was perfectly curved to sit just above his eyes.  Maybe it was that when he held his glove in front of his face all he let you see were his eyes.  I don’t know for sure, but I can tell you that as a 13-year old kid I was scared.  I had never seen so much focus in all of my life.  To feel all of that emotions while looking into someone’s eyes is an emotion from that World Series that I will never forget.

As a batter facing Stewart, I don’t know how you couldn’t be intimidated.  I can compare his fierce stare to that of someone playing football and seeing Lawrence Taylor lined up against him.  He is the lion and you are his prey.  All of his attention is on you and he is not going to lose sight of you until you are destroyed.

In what was an unforgettable World Series with baseball’s superstars on display, it was the stare and focus of Dave Stewart that remains my greatest memories from 1988’s fall classic.