I already owned this baseball card, but I needed a second one.

The first time I scooped this one up it was because I was building the 1984 Topps Highlights set.

And since I am a dedicated, and sometimes obsessive collector, I cannot pull from one set to add to another.

So, I bought another one. 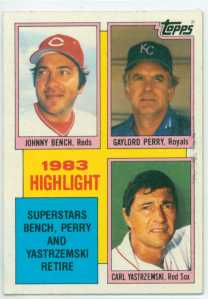 This one will rest comfortably within my Johnny Bench collection. 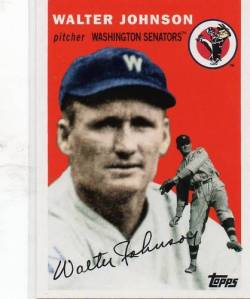 My take – While I am surprised that it took almost 60 years for Johnson’s record to fall, I have to believe that Nolan Ryan’s current record of 5,714 will never be eclipsed… 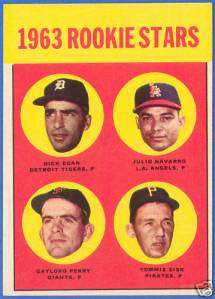 Julio Navarro – Navarro enjoyed six seasons in the major leagues, but he was used sparingly.  Pitching a total of 212 innings, Navarro appeared in 130 games for the Angels, Tigers, and Braves.  He has a career record of 7-9 with 17 saves and an ERA of 3.65.  Navarro allowed 191 hits and 97 runs while also striking out 151 batters and walking 70.

Gaylord Perry – Hall of Famer Gaylord Perry played 22 seasons in the big leagues.  He is a 2-time Cy Young Award winner as well as a member of the ‘300 Wins Club’ and 3000 Strikeouts Club’.  Perry amassed 314 wins during his career and pitched an amazing 303 complete games, 53 of which were shutouts.  Gaylord Perry is a 5-time All-star.

Tommie Sisk – A 9-year veteran, Tommie Sisk suited up for the Pirates, Padres, and White Sox during his playing days.  He has a career record of 40-49 with 10 saves.  40 of his wins include 19 complete games and 4 shutouts.  In 928 innings of work, Sisk allowed 937 hits while giving up 57 home runs. 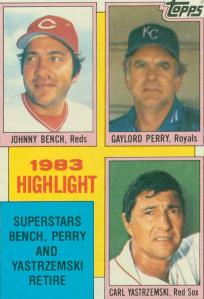 I love everything that they represent.  While a 792-card set issued by Topps on an annual basis back in the 1980’s was a nice way to get prepared for another baseball season, it was the subset that gave you the history, the special moments, the memories we will cherish!!

I picked up this 6-card doozie for just $1 on Ebay.  I am happy to own it, and I will share it with you all day long.  And while doing so, I thought it would be fun to reflect back on this set 25 years after its release. 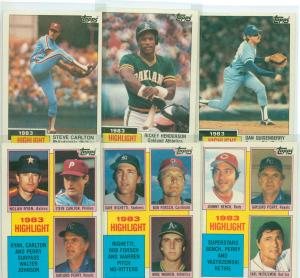 Fergie Jenkins And The Hall Of Fame Class Of 1991

Fergie Jenkins was elected into the Baseball Hall of Fame in 1991.  Sitting alongside Rod Carew and Gaylord Perry, Jenkins was a very proud man as he was the first ever Canadian-born player elected into Cooperstown.

Gaylord Perry became the first pitcher to win the Cy Young Award in both leagues, with the Cleveland Indians(American League) in 1972 and the San Diego Padres(National League) in 1978.

My take – I did not know that…

This set has been a blast to collect and I have learned quite a bit about these guys as I have shown them off to you.  I am eager to obtain the last 5 cards of this set so I can mark off another piece to my collection as being complete.  And I am sure that I will learn more about Tug McGraw, Nolan Ryan, Tony Perez, Kent Tekulve, and Sparky Lyle in the process.

Stay tuned – the final 5 cards should be all mine in the coming weeks!!!