I don’t like to pay for a lot of things, especially autographs. But sometimes when you want to get something signed you simply have to open the wallet. That was true today as I attempted to graph a few NFL Hall of Famers at a charity golf tournament. Don Shula attended last year but this year was a no-show. I decided to stay despite that information as Raiders’ linebacker Ted Hendricks was in attendance, and he’s eluded me a few times recently.

While waiting for Hendricks, I bumped into Saints’ LB Rickey Jackson, who was just inducted into the NFL HOF. I had no idea he was going to be there so I had nothing for him. But I was hoping I could get his address. “If you have one of those things,” he said, pointing to one of my Hendricks GLACs, “then you must have my address.” I told him that I really didn’t. “The whole world has my address,” he responded. He was nice enough to give it to me (wrote it on the back of a business card). I’ll share it as soon as he returns the stuff I’m going to send him.

Had trouble finding Hendricks. A volunteer told me he was wearing an orange shirt, so I spent an hour looking for someone in an orange shirt. Of course, he wasn’t wearing an orange shirt at all, but a light blue shirt. I finally identified him at 5:15 p.m. I had to graph him out of sight of organizer Larry Little, who was insisting that if people wanted graphs they had to get them at tomorrow’s signing, which of course I couldn’t attend (nor would I pay the kind of money he wanted).

As Hendricks was about to walk into the post-tournament awards ceremony, I approached him and told him that I was a big collector of GLACs. I asked him to sign the card which I had in my hand and he shook his head no. I walked with him and asked him again, telling him this time that I would pay him money if he would just sign the card. I took out the bills in my wallet — two $20s and a dollar. He looked at the money and took the two $20s. “Do you really have to take both $20s?” He handed me back the other $20 and signed the GLAC, taking his time with every letter and inscribing his HOF year. I had the Raiders’ mini in my bag and was just about to walk away when I figured I’d ask Hendricks to sign it, too. “Hey Ted, would you sign my Raiders’ mini if I gave you the other $20?” Sure enough, he took the $20, taking his time with every letter and again inscribing his HOF year. Without the money, he was impolite. With money in hand, he was the nicest guy ever, even telling me that I should attend tomorrow’s signing because even more HOFers were going to be in attendance.

Ted Hendricks: 1/1 for $20 cash (GLAC with “HOF” inscription), 1/1 for $20 cash (Raiders’ mini with “HOF” inscription)…..a big thanks to a local grapher (he knows who he is) for trading me a Raiders’ mini, which he had in his trunk, for a ‘Canes’ mini. I could have gotten Hendricks on the ‘Canes mini since he did play at UM but his graph looks so much nicer on a Raiders’ mini. The guy was graphing with me, knew Hendricks was there and was a Raider, and he still traded me the mini. Cool dude

I roasted but at least I got to see a good game. Made the mistake of wearing my Gators’ shirt so I got a few comments for that (but at least they were in fun). I was told that my ticket cost $45 and thought the cashier was being serious until I realized he was poking fun at me for my UF allegiances. Saw Miami Heat coach Eric Spoelstra but didn’t have anything for him. Got lucky that it was Fan Appreciation Day and uncut sheets of team cards were being given out. I grabbed two. On to the totals: 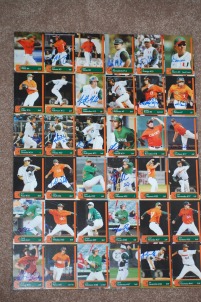 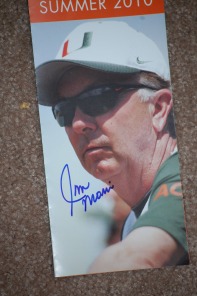 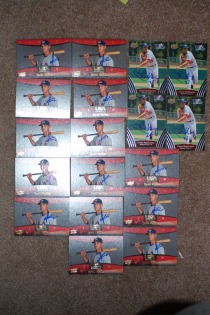 WoW!!!  A very quick TTM return from Marlins’ first baseman, Gaby Sanchez.  Just 11 days after sending out a batch of TTM requests, Gaby signed a card for me and returned it very quickly.  I guess it helps that we are just one county apart, huh??

Gaby won the starting job at 1st base during Spring Training.  And while he has yet to put up the offensive numbers that most think that he can, his on-base percentage is very nice for a batter that hits 8th in the lineup.  Gaby is a Florida guy, having played baseball for the University of Miami.  I’ve been following him for a while now, and it is great to add his signature to my Marlins collection! 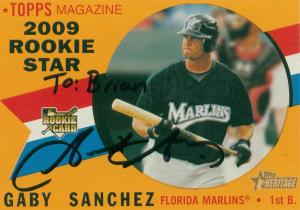 As I sit here and watch the University of Miami battle Florida State in their opening game of the 2009 college football season, I feel nostalgic.

You see, right now it can get no better for either team.  They’re both undefeated, with a handful of games ahead of them.  Tonight they battle their in-state rivals and their biggest foes.  It gets no bigger or better that Miami vs Florida State.  My mind drifts to all of the close games decided by field goals(or less).  My mind drifts to all of those close contests over the years that have built this rivalry into what it is today.

I am a Canes fan.  A very proud Canes fan.  And while I don’t hate the Seminoles(not like I do the Gators or Buckeyes), I desperately want this team to do well and make ‘The U’ a football powerhouse again.

I miss the old days….

Give me Ed Reed and Andre Johnson and Reggie Wayne and Bernie Kosar.  I’ll take Ken Dorsey and Bubba Franks and Ray Lewis and and Santana Moss and Jerome Brown.  Hurricane football is about passion, and it’s about dedication to the team.  I remember watching Michael Irvin and Vinny Testaverde and Clinton Portis and Devin Hester.  And since I am in a mood to do a ton of name dropping, don’t let me forget about Willis McGahee or Jeremy Shockey or Dan Morgan and Jim Kelly and Frank Gore.

I was born in Miami.  My heart pumps Orange and Green.  I am a Cane.  And I live for games like tonight!!! 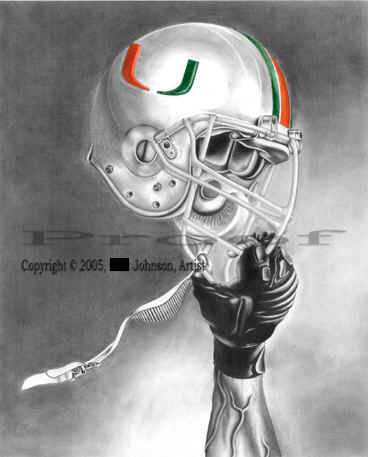