On this day back in 1990, Ken Griffey Sr. and Ken Griffey Jr. became the first ever Father & Son duo to hit back-to-back home runs in the major leagues.

An event that must have been extremely memorable and enjoyable for the duo, the Griffey men certainly had a great evening.

Ken Sr. went 2-for-5 on the day with a home run and 3 RBI.  The younger Griffey went 1-for-4 with his solo home run.  Their combined offensive output was not enough to hold of the Angels as the Mariners lost 7-5.

Still, a very memorable and historic night in Anaheim!!! 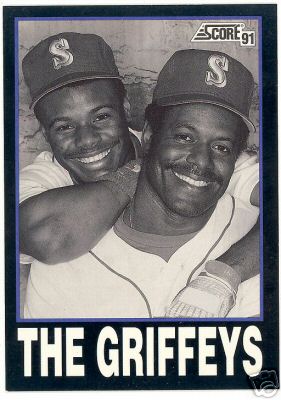 Well, my shipment of singles from the new 2014 Topps Archives release has arrived and I am ready to start showing off some of the spoils from that shipment.

While I normally try to stick to only nabbing cards that feature the legendary and modern players I actively collect, I let that rule loosen up when it comes to Topps’ Archives brand as I am a sucker for the designs.

Among the cards that I hauled in was this card of ‘The Kid’, Ken Griffey, Jr. 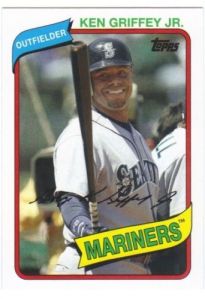 And while the image is far from the best one I have seen used of Griffey in modern releases, I will say that I am happy that he was featured as a Seattle Mariner.

Though I would have really liked to see an image of a very young ‘Kid’.

If you’re a dad or a son or a daughter, take some time today to sit back and relax.  If you’re able to spend a little more quality time with your dad today then let him know just how valued of a man he is in your life.

And if you get the chance, take in a ballgame with him too.

On this day back in 1987, Ken Griffey Jr. was selected as the 1st pick in baseball’s professional draft. At just 17 years of age, the sky was the limit for ‘The Kid’ that was born to play professional baseball.

Having grown up around big league players and ball parks during his entire youth, Griffey had the rare advantage of knowing what the daily life of a big leaguer was about well before he suited up for one. And even with all eyes on him, Griffey excelled and certainly lived up to the hype of being the first pick in the draft as well as the son of one of the game’s former stars.

Did Griffey accomplished everything that was expected of him? Probably not. But I don’t think anyone can live up to some of the tags thrown at him from such a young age. Still, Griffey Jr. had a brilliant career and should be named amongst the sport’s greatest players of all-time, and certainly of his generation. 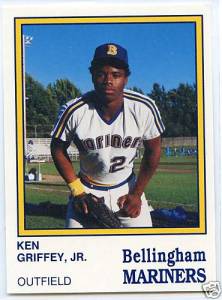 And for that reason alone, I can totally support a set of cards that picks ‘The Best Of The Best’ from these teams.

In 2014, Topps issued a subset in their Series 1 release that took one player at each position, naming them to the ‘Topps All Rookie Cup Team’.

Representing the catcher is Ken Griffey:

Ken Griffey Jr. has a lot of lofty expectations placed on him prior to his first at-bat as a major league player.

And during his debut season, he did not disappoint.  He played in 127 games for the Mariners during his rookie campaign.

A very solid debut for Junior!

During the collecting days of my youth, I cannot recall a rookie that received more attention from the hobby than Ken Griffey Jr.  And it all started before he suited up for one game.  Now I saw my share of rookie phenoms – Dwight Gooden, Roger Clemens, Jerome Walton…  But none of these guys carried the hobby prior to making their major league debuts.

So when Junior stepped to the plate in just the 7th game of his big league career and belted a home run to deep left field, collectors around the world sighed.   At home, and in front of close to 34,000 fans, Griffey launched home run #1 off of White Sox pitcher Eric King.  And as they say, the rest was history…

Today, Griffey sits in 5th place on the all-time home run list with 630.  Exactly 30 homers behind one of his baseball idols, Willie Mays.

Happy Anniversary to ‘The Kid’!!! 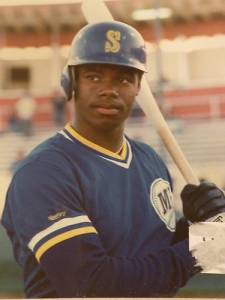 As I mentioned a few weeks ago, I completed a nice purchase of 2013 Allen & Ginter base card singles that would add a little A&G bulk to my collection.

Of the cards I bought, all were legends – either current or sure to be Hall of Famers!

First, I showed you the Johnny Bench card.

I also showed off the Joe Morgan mini no-number card.

And then I showed you the Eddie Murray card.

Well, now it is time to feature the card of a future HOFer – Ken Griffey, Jr.

I like the card.  The Blue tones from the card’s border and text are nice complements to the Navy Blue of the Seattle Mariners uniform.

I just wish that Topps chose a better image to offer – this one makes me yawn a bit.  And that is tough when the player was one of the most exciting from his, or any, era.

Wow, talk about a card that stands out, this one is the shiniest card that I spotted at the show. 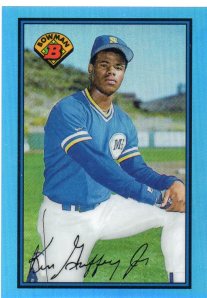 This card is from the 2013 Bowman Sapphire Rookie Re-print set, and it features his famous 1989 Bowman rookie card.

The shine is unreal – between the shade of Blue chosen and the high-gloss finish, the card actually reflects light!

I paid $1.00 for the card – not sure if that was over or under-paying, but I was not going to simply pass this one by.

That’s right, baby, I have finally brought one home.

One of the most iconic, and collected, baseball cards of all-time – the 1989 Upper Deck, Ken Griffey Jr. rookie baseball card. 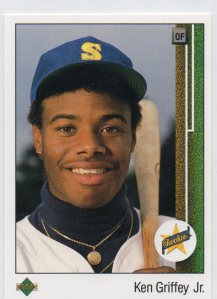 I’ve seen it a million times on the web, and in print, but it has been more than 20 years since I have held one in my hands and called one my own.

But, things have changed – and I am now a proud owner if this fantastic, and historic, baseball card.

Back when the 1989 Upper Deck set debuted, this card was HOT!  As an avid collector, I built the full set so I was able to nab one Griffey that way.  And over time, I know that I ha at least 2 more in my collection.

But, that was a long time ago and those cards are unfortunately long gone.

Of all of the cards that I got rid of when I trimmed down my collection from tens of thousands to less than fifty, and of the cards that were spared, this is definitely one that I welcome back with open arms!!

I have never seen a player enter the league with the fanfare that Ken Griffey Jr. had.  A hobby legend before he even took a swing in the major leagues, Junior was destined for greatness.  He may not reach each and every lofty goal that fans and experts pegged him for at the young age of 18, but ‘The Kid’ has had a brilliant career.

Where do you start?  With a swing that is comparable to the most skilled hitters of all-time or the brilliance of a defensive genius?  Let’s change it up a little and go defense first this time.

At a young age, Griffey was found on highlight reels for his remarkable play in the field.  Never tagged as one of the fastest guys in the game, Griffey had a nose for the ball and was able to make unbelievable catches look common.  His arm strength was good but it was his ability to get to the ball and create outs, which would have been hits or home runs otherwise, is what made Griffey stand alone.  A winner of 10 consecutive Gold Glove awards, beginning with his second year in the league, Griffey dominated center field for a decade with the Seattle Mariners.  Making impossible catch after impossible catch, Griffey played defense superbly and made it his mission to make outs of of possible hits.

Offensively, Griffey is dynamic.  Through the 2008 season, Griffey had already eclipsed the baseball milestone of 600 home runs.  Today he stands at 611 and if he can remain healthy and has a desire to play for another 4 years, 700 is not improbable.  In addition to his power hitting, Griffey is a very good contact hitter.  With a career batting averge of .288, with 2,680 total hits, Griffey has hit .300 or better in 8 seasons.  And along with the hits, the RBI pour in.  Junior has 1,772 RBI and has also scored 1,612 runs.  He was also a base stealing threat during the first 10 years of his career.  To date, he has 184 stolen bases on his resume.

Ken Griffey, Jr. has never played in a World Series.  In his limited post-season experience, just 18 games in 20 years, ‘The Kid’ has been phenomenal.  With a .290 average, Griffey has crushed 6 home runs while collecting 11 RBI and scoring 12 runs.