Notes From Career:  Hall of Famer Phil Niekro has 318 career wins as a major league pitcher, including two 20-win seasons.  Niekro is a 5-time All-Star and 5-time Gold Glove Award winner with a career ERA of 3.35.  He threw 5,404 innings during his career, striking out 3,342 batters during that time.

Eddie Matthews had a solid 17-year professional baseball career.  And while his individual achievements and team success were on par with the biggest stars of his era, it was his quiet approach to the game that kept him out of the limelight.  Playing alongside Hank Aaron for most of his career kept the spotlight off of him as well…

Still, Matthews was quite the slugger, and he put up very impressive numbers.  Clubbing 512 home runs during his career, Matthews hit 25 or more home runs in 11 consecutive seasons, and 12 in total.  A run-producer, Eddie knocked in 100 runs five times while also scoring 100 or more runs 8 times.

Matthews was a 9-time All-Star and perennial candidate for the MVP award.  He was elected into the National Baseball Hall of Fame in 1978.

He helped lead his 1957 Braves and 1968 Tigers teams to World Series championships.

On this day in 1976, Hank Aaron played in his final game as a major league baseball player.

On the last day of the 1976 baseball season, Aaron and his Brewers teammates were at home in Milwaukee taking on the Detroit Tigers.  Sadly, there were less than 7,000 fans in the stands to see Aaron make his final appearance in the big leagues.

Aaron was hitless in the game until the 6th inning when he hit a single off of Tigers’ pitcher Dave Roberts.

That at-bat would be the final one of his career.  It was hit 3,771 of Hank’s amazing career!!

More known by today’s baseball fan as the manager that led the New York Yankees to multiple World Series wins over the last 15 years, Joe Torre was also a fantastic baseball player.

A guy that was able to play numerous infield positions, Torre was valuable to the rosters he was a part of during his 18 seasons as a player in the big leagues.

A 9-time All-Star, Torre was a steady contact hitter that collected 2,342 career hits alongside his lifetime batting average of .297 displays his amazing consistency at the plate.

Torre never made the postseason as a player, but he made up for that during his coaching career. After unsuccessful stints in New York (Mets), Atlanta, and St. Louis, Torre took over as the Yankees skipper in 1996. He promptly won 4 World Series titles over the next five seasons. 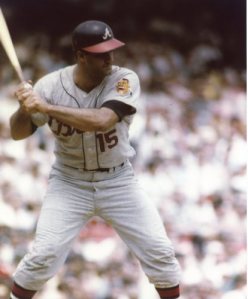 After playing 15 years with the Braves organization, Mathews bounced around a bit between Detroit and Houston to finish his 17-year major league career. It was in 1967, during his time with the Houston Astros that Mathews became just the seventh player in big league history to collect 500 home runs.

He did it on July 14th in 1967 when he and his Astros teammates were on the road in San Francisco to take on the Giants. In the top of the 6th inning Mathews hit a huge home run off of future Hall of Fame pitcher Juan Marichal and the rest was history. For the game, Mathews went 2-for-4 with 3 RBI and 1 run scored.

On this day in 1954, Henry ‘Hank’ Aaron crushed the first home run of his major league career.

On the road, and playing against the St. Louis Cardinals, Hank Aaron and the Milwaukee Braves battled the Cards in a 4-hour marathon. In total, the game consisted of 25 hits and 12 runs.

And for Aaron, this game was where his historic start as one of the game’s greatest power hitters took off. In the top of the 6th inning, Aaron belted a solo homer off of Cardinals’ pitcher Vic Raschi. On the day, Aaron went 3-for-7, while collecting 2 RBI, scoring 2 runs, and connecting for his first home run as a major league player. 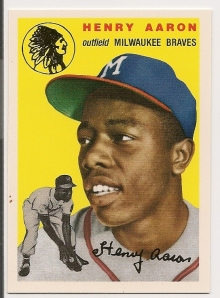 A 21-year big league veteran, Warren Spahn was solidifying his spot as one of the game’s greatest pitchers way before the likes of Tom Seaver, Nolan Ryan, and Bob Gibson.

Over the course of his playing days, Spahn collected 363 wins – including 13 seasons of at least 20!! A truly amazing and durable hurler, Spahn started 665 contests during his career, and finished way more than half(382 to be exact) including 63 shutouts.

Warren Spahn was a 15-time All-Star and the 1957 Cy Young Award winner. He was a member of the 1957 Milwaukee Braves World Series championship winning team in which he started 2 games, going 1-1.