Notes From Career:  At the time of his retirement, Johnson would be the major league leader in career pinch-hits.  He was a journeyman that played for seven teams in 15 seasons.  But, he could hit – and he could do it off of the bench.  His bat was widely respected throughout baseball, and his playing on five different teams in nine seasons shows that his talent was widely respected and needed.

The Story – Baltimore, Maryland, August 5, 1984.  Blue Jays’ Cliff Johnson batted for Willie Aiken in the 8th inning and promptly belted his 19th career pinch-homer to give club 4-3 win vs. Orioles and establish a new major league record.  The former mark of 18 pinch-homers had been set by Jerry Lynch(Pirates, Reds), 1954-1966. 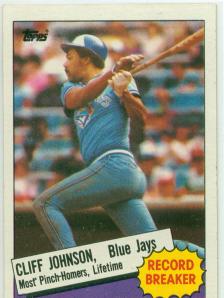 My added notes – Johnson added 1 more pinch-homer to his tally giving him 20 for his career.  His record still stands today.

This was a fun set to review.  Taking a look back at the major headlines from the sport 30 years ago really puts into perspective how much the game and its players have changed over the course of 3 decades.

I also love to learn more about the players that paved the way for the stars of today.  Picking up extra knowledge and admiration for guys like Willie McCovey, Pete Rose, Lou Brock, and Carl Yastrzemski is never a bad thing when you are someone who loves and appreciates the history of the game like I do!!

Here’s a look at the complete 6-card set:

I hope you enjoyed learning about these guys and their amazing feats from the 1979 baseball season as much as I did.

I am certainly going to go after more subsets as I continue to find this to be great fun!!!  Thanks.

I was able to pick up this subset for a very low price.  It’s a 6-card set and it highlights some amazing accomplishments that occurred during the 1979 baseball season.

30 years later – The new record holder is Lenny Harris who has 212 career pinch-hits.