Well, with this one, I kind of lucked out a bit.  This card was on my Gary Carter ‘Needs List’ so it kind of made the choice itself – it is a mandatory card to get into my Carter collection.

And now it is mine…

Headline – Fisk Sets Record By Catching All 25 Innings Of Marathon

Mike Garman – Drafted 3rd in the 1967 draft, Garman hardly had the career one would expect of a 3rd pick in the draft.  Still, Garman enjoyed a 9-season career while playing with the Boston Red Sox, St. Louis Cardinals, Chicago Cubs, and Los Angeles Dodgers.  Garman finished his career with a 22-27 record while collecting 42 saves.  With a 3.63 ERA Garman appeared in 303 games and pitched 433 innings.

Cecil Cooper – Cooper played 16 years in the big leagues and enjoyed successful stints with the Red Sox and Brewers.  He was a 5-time All-Star, 3-time Silver Slugger winner and winner of 2 Gold Gloves.  Cooper has 2,192 career hits alongside 241 home runs, 1,012 runs scored, and 1,125 RBI.  With a career batting average of .298, Cooper had 7,939 plate appearances during his career.

This ‘That Guy’ will focus on the player that you witnessed as being groomed to take over for a veteran that was getting ready to leave the game of baseball.  Unfortunately, ‘That Guy’ never quite made it and surely did not replace his former teammate in the manner that the team thought he was destined for.

For me, ‘That Guy’ is Ron Karkovice.  Karkovice was the one that was going to push Carlton Fisk out the door and take over as the full-time catcher for the Chicago White Sox.  Having moved to Chicago in 1989, I was able to witness first hand how the Sox tried and tried and tried to give ‘Karko’ chances to budge ‘Pudge’.  But he just couldn’t do it.

In Karkovice’s rookie season of 1986 he was able to appear in 37 games.  Fisk got a majority of the playing time and while being 16 years older than his understudy, he was still the better all-around option.  As we all know, catchers tend to break down earlier than other position players due to the stress put on their knees.  But even as the years progressed, Karkovice couldn’t overtake Fisk even though the aging superstar’s offensive skills began to decline.  From 1986-1991, Karkovice played in 336 games while his aging mentor managed to get playing time in 710 contests.  Yet, the Sox never gave up on Ron.  His batting average over the course of those 6 seasons was a dismal .222 while Fisk did not fare too much better at .260.  Karkovice failed to provide run production as he amassed just 23 home runs and 95 RBI in those six seasons, yet Fisk was still delivering as he bashed 105 homers and drove in an impressive 391 RBI as he played well into his 40’s.

And still the Chicago White Sox didn’t give up on Karkovice.  New catchers were not brought in to challenge him for the back-up role and be the possible successor to ‘Pudge’.  It’s amazing to see how little production Karkovice added to the White Sox line-up, yet the team continued to give him time to make adjustments as their aging superstar played into his mid-40’s.

The roles reversed during the 1992 season as Karkovice finally earned more playing time and got 70% of the starts.  His offense began to take off and he was able to increase his batting average to an acceptable level for a catcher and his power numbers increased as he reached double-digit numbers in home runs in the next 5 seasons.

So, while Ron Karkovice was clearly unable to fill in for Carlton Fisk, the team certainly gave him an extensive learning curve as they stood by him for 6 dismal seasons before he finally broke though and became a starter.  I have to think that in today’s game of 1-year contracts and trade deadlines that no team would be willing to invest the time and money into a player the way that the Chicago White Sox did for Ron Karkovice.

Who is your ‘That guy’???  Does a certain player come to mind when you think ‘I cannot believe that this guy is back with us for another season?’ or ‘What is management thinking by keeping this guy around”? 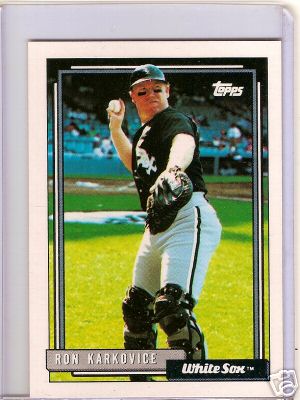 Carlton Fisk’s debut in the major leagues is one of most impressive by a rookie.  In 1972, ‘Pudge’ debuted for the Boston Red Sox and immediately made an impact on both offense and defense.  Fisk batted .293 while blasting 22 home runs and collecting 61 RBI.  On defense he secured the only Gold Glove of his career.  With this well-rounded play, Fisk won the Rookie of the Year award, finished 4thfor the MVP, and was named an All-star.  This was the first of 7 top 18 finishes for ‘Pudge’ in the MVP race.  With a career batting averageof .269 along with 376 home runs and 1,330 RBI, ‘Pudge’ had a consistently strong 24-season big league career.  Being able to play 24 seasons for just 2 teams, The Red & White Sox, Fisk was always considered a fan favorite and was wildly popular both during and after his playing days.

Fisk’s lone appearance in the World Series came in 1975 when his Boston Red Sox lost in game 7 to the Cincinnati Reds.  Although he did not win the title, the image of Fisk waving a ball ‘fair’ as it headed for the outfield still remains a World Series classic that is replayed every fall.  In that 7-game series, Fisk hit .240 while collecting 6 hits, 4 RBI, smashing 2 home runs, and scoring 5 times.