No, I don’t have this card.  But I sure would like one…

While not the most thrilling baseball card to look at, I think that what I like most about rookie cards in general is that as a collector you never really know what you’re going to get out of a player when they are a rookie…

Some come into the league and dominate from the start.  And then there are the guys that barely make a roster yet have a 20-year career.

In Bob Gibson’s case, I bet there were very few that thought that the 23-year old pitcher from Nebraska that turned in a 3-5 seasons in 1959 was going to become a Hall of Famer.

But that is what is wonderful about this sport that we love.  You never know what you’re going to get…

And I wouldn’t mind getting one of these!!! 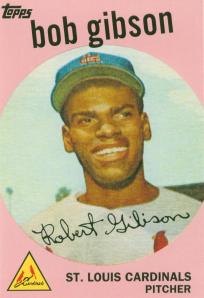 Bob Gibson was elected to the Baseball Hall Of Fame in 1981.  He was awarded entry on his first ballot as he captured 337/401 votes cast.

His Hall of Fame plaque reads: 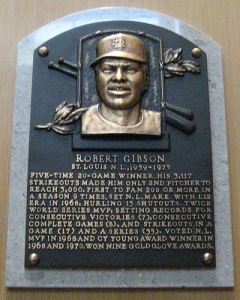 While Gibson played on some pretty poor Cardinals teams during the begining and end of his career, he also starred on their dominant squads that played in the mid 1960’s.

And during a span of 5 seasons, Gibson and his Cardinals teammates competed for 3 World Series championships – winning 2 of them.

And in those 3 match-ups, Gibson was unstoppable!!

Competing in 9 contests, Gibson went 7-2, while throwing an incredible 8 complete games including 2 shutouts.  His ERA in World Series play is a low 1.89.  And in 81 innings of work, Gibson struck out 92 batters while walking just 17. 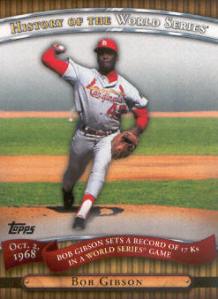 On August 14, 1971, Bob Gibson was masterful as he and his Cardinals teammates battled the Pirates in Pittsburgh.

Defeating the team by himself, Gibson did what everyone knew that his talents could offer.  Allowing no hits to a very talented Pirates squad, Gibson made major league history.  He went the distance in the contest while facing 28 batters.  His impressive numbers from this outing include:  10 strikeouts, 3 walks, 0 runs, and 0 hits allowed!!!

And ‘Hoot’ helped himself at the plate too.  Going 1-for-4, Gibson drove in three runs to help pad the team’s lead.  The Cardinals ended up winning the contest 11-0. 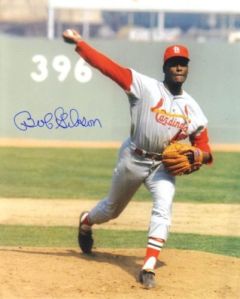 Bob Gibson Picked Up Another Cy Young Award In 1970…

Bob Gibson Picked Up Another Cy Young Award In 1970…

After securing his first Cy Young award in 1968, Gibson did it again just two years later.

In 1970, Gibson started in 34 contests for the Cardinals.  He amassed a 23-7 record, while finishing 23 of his starts, which included 3 shutouts.  During that season, Gibson amassed a 3.12 ERA while striking out 274 batters and walking just 88. 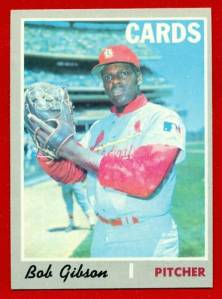 Bob Gibson’s 1968 season was one that makes players into legends.  His performance from the start of the season through the entire schedule and playoffs included is one of the most talked about and heralded seasons by a pitcher in major league history.

Gibson took that dominance and rung up both the National League’s Cy Young and Most Valuable Player Awards.  And nobody could complain about that… 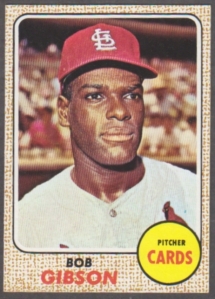 The Story – At home, and battling ‘The Big Red Machine’, Bob Gibson had an ‘odd’ day by the standards he had set for himself.  Battling the talented Reds’ offense, Gibson pitched 7 innings while giving up 10 hits and only striking out 4.  But in those 4 strikeouts came #3,000 of his career against Cesar Geronimo.

Baseball History – Gibson struck out 3,117 batters over the course of his 17-year career.  He currently ranks in 14th place on the all-time list. 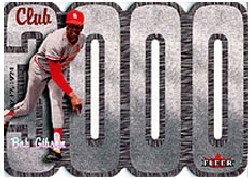 The dominant pitchers that ruled the 1960’s and 1970’s were excellent athletes.  From Jim Palmer to Tom Seaver to Fergie Jenkins and Bob Gibson – all of them excelled in baseball and other sports during their youth.

But as big leaguers, Bob Gibson stood apart from them largely due to his ability to be a superb defender while on the mound.  Those guys were all good defenders, but Bob Gibson was phenomenal.

Gibson won his first Gold Glove award in 1965.  And from there, he hauled in 8 more award in eight straight years. 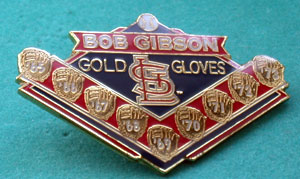 Bob Gibson Is An 8-Time All-Star

Bob Gibson Is An 8-Time All-Star

During his 17 seasons in the majors, Bob Gibson was selected as a pitcher for the National League All-Star team 8 times.

His first appearance on the NL squad came during his 4th season and 2nd full year with Cardinals, 1962.  After that, he was left off of the team for two years before making the team in 7 of the next 8 campaigns. 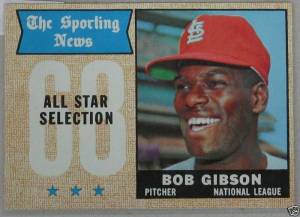 While his resume states that he competed in 17 big league seasons, the truth is that 98% of the games that Bob Gibson appeared in spanned 14 major league seasons, from 1961-1974.

And in the post-season, Gibson made another 9 starts, going 7-2. 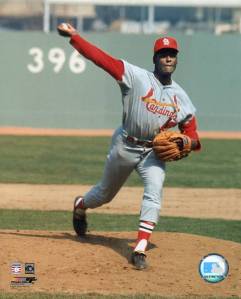