How they got there:

Boog Powell hit .297 during the 1970 baseball season.  He connected for 156 hits that year including 28 doubles and 35 home runs.  Boog drove in 114 runs for the Orioles during the year while also scoring 82 times.

Johnny Bench is the all-time home run hitter in Cincinnati Reds team history.  Bench connected for 389 career home runs during his Hall of Fame career, all coming as a member of the Reds. 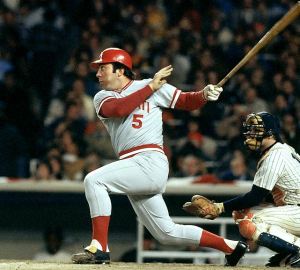 Notes From His 1975 Season:  Tommy John did not play during the 1975 baseball season.

Notes From Career:  Tommy John capped his amazing 26-season major league career with a record of 288-231.  John was a 4-time All-Star pitcher who played for six different teams during his career.  He has a career ERA of 3.34 in 4,710 innings of work.  John struck out 2,245 batters in that time while allowing 4,783 hits and 2,017 runs to score.  He played in three World Series match-up during his career, coming up short in each.

Best known as ‘Yaz’, Carl Yastrzemski personified what being a consistent leader was all about.  ‘Yaz’ spent every minute of his 23-season long career in a Boston Red Sox jersey.

Along with the droves of fans he established during his career, ‘Yaz’ put up some amazing numbers too. 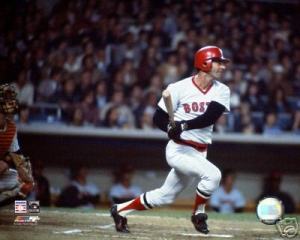 As a kid collecting baseball cards, I used the 1983 Topps Super Veterans subset as a tool to learn about the ‘older’ players in the game.  The set was large and it featured images from the beginning of each player’s career and then images that were current (1982-83).

When I got back into collecting in 2008, this same subset was the first one I went after.  I had built it 20+ years prior, but I wanted to re-live my youth by doing it again.  So, I did.  And it re-kindled my enjoyment for vintage baseball cards and the players that helped shape the history of the game.

Upon completion of that subset, and learning that Topps had begun recycling older designs in their modern releases, I kept my fingers crossed that ‘Super Veterans’ would eventually be re-done.

And when 2014 Topps, Series 1 hit the shelves, a 15-card subset of ‘Super Veterans’ was included.  I was ecstatic.  And I quickly made this a target for my collection.  And after a few days of shopping around, I scored the complete 15-card set and began showing it off on this blog as I did with the 1983 set back in 2009. 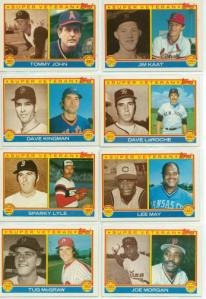 And now for my review and comparison.

Overall, I of course like both sets. I wish that the 2014 version included more players on the checklist or at least was continued into the Series 2 release.  I don’t find that the 2014 version has the same star power that the set from ’83 offers even though it features Jeter, Rivera, and Cabrera – I just don’t think that Topps truly dug in deep enough to really get behind this set.  It feels like it was put together as a way to add Pettitte and Rivera cards into yet another subset.  If they had truly shown us the longest tenured players in the majors, we would have had a more apples-to-apples comparison.  The set is called ‘Super Veterans’ for a reason; it is not called ‘Best Older Players In The Game’.  At the very least, and to be more consistent with the original subset, this one should have included Jason Giambi, Ichiro, Paul Konerko, Raul Ibanez, LaTroy Hawkins, and Bartolo Colon.  If Topps had taken this step, it would definitely be more true to what ‘Super Veterans’ offered in 1983.

Still, no complaints from my side.  I’m thrilled to have both sets in my collection.  I’m just thirsty for more!