Notes From Career:  Over his 19-year major league career, Rick Monday played for three prominent franchises – The A’s, Cubs, and Dodgers.  He was a 2-time All-Star and a member of the 1981 World Series championship winning LA Dodgers.  Monday retired from the sport with a lifetime .264 batting average with 1,169 hits including 241 home runs. 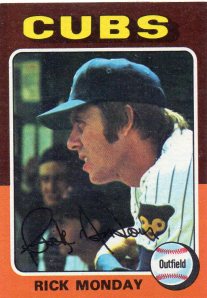 Mickey Mantle retired after the 1968 baseball season.  It is nice to see him included in this set.

Mickey Mantle was the boyhood idol to millions of baseball fans during the 1950s and 1960s.  The memories that he created for them still live on today as he is one of the most cherished personalities that the sport has ever had.

Mantle played in the major leagues for 18 seasons, all with the New York Yankees.  A great athlete, Mantle combined the skills of contact hitting, power hitting, and speed on the base paths to give Yankee fans something to cheer for at each game he played in.

Mantle’s career numbers are superb; and to think that he accomplished much of these grand milestones while injured confirms just how uber-talented he was. 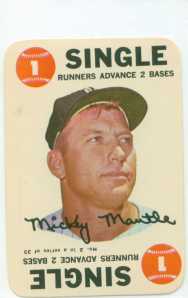 Hank Aaron is one of the most accomplished baseball stars in the history of the sport.

Among the top of the leaderboards of almost every major offensive statistical category, Aaron is cemented as one of the greatest players of all-time.

Aaron is third in games played, third in hits, first in total bases, fourth in runs scored, second in home runs, tenth in doubles, and first in runs batted in.

Aaron is a member of the 1957 World Series championship winning Braves.  He is a 21-time All-Star.  He won three Gold Gloves for defensive excellence and the 1957 National League MVP award. 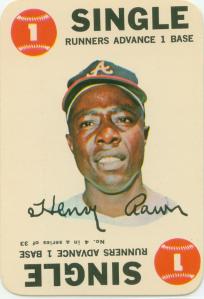 I consider Rod Carew to be one of the most underrated superstars in baseball history.

But when people talk about the greatest hitters in the sport’s history, Carew gets very little credit yet his numbers stack up quite well to the competition.  In 19 seasons, Carew collected 3,053 hits alongside a .320 batting average.  He also managed to score 1,424 runs, drive in 1,015 runs, and steal 353 bases.

The reason that Rod Carew still remains under the radar in the world of baseball card collecting is because he played for very low-profile teams – the Twins and Angels.  If he suited up for the Yankees, Dodgers, Cubs, or Reds he would be as sought after as any of the best hitters in the sport’s history. 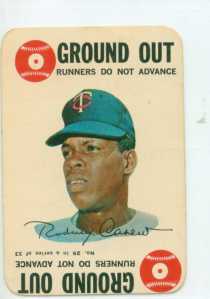 The resume of Brooks Robinson is more incredible each and every time I take a peek at it.  I’ve always known him to be a great defensive ball player, but his offensive and team success during his 23-year career cannot be denied.  While Mike Schmidt may be the more explosive, and Chipper Jones may be the better pure hitter of the bunch, Brooks can certainly hold his own in the conversation ranking the best third basemen in baseball history. 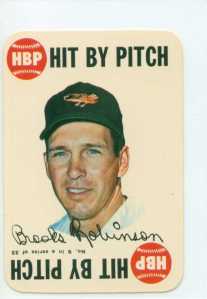 Tommy Davis played in the big leagues for 18 seasons.  During that time, he suited up for ten major league teams. And he was a solid contributor for most of them.

Davis won two batting titles with the Los Angeles Dodgers in 1962 ans 1963.  He was also an All-Star in those two campaigns. 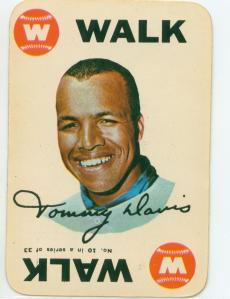 Gary Peters played in 14 big league campaigns.  Hi s debut came in 1959, but with very limited action in his first four seasons, he was still tagged as a ‘Rookie’ in 1963; the year that he won the American League’s Rookie of the Year Award.

In his first full campaign, Peters started 30 games while posting a 19-8 record.  He threw 13 complete games, including 4 shutouts.  Peters amassed an ERA of 2.33 during his rookie season while also striking out 189 batters in 243 innings of work.

For his career, Peters posted a record of 124-103.  He was a 2-time All-Star and never made a postseason appearance. 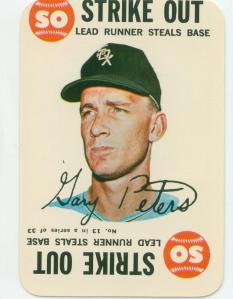 There is no doubt as to why George Scott was included in this 1968 set.

Simply stated, Scott had a fantastic sophomore-season in 1967.

As a 23-year old member of the Boston Red Sox, George Scott put together the kind of season that the ‘Fenway Faithful’ attaches to the tag os ‘Superstar’.

Scott’s efforts in 1967 landed in 10th place for the AL MVP Award, and he also brought home a Gold Glove Award too.

Scott would go on to win 8 Gold Glove Awards during his time in Boston and Milwaukee.  He would finish in the Top 25 for the MVP Award five times. 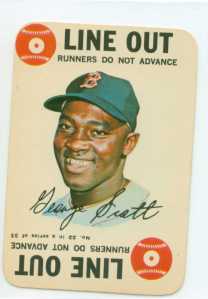 The list of accolades are endless.  His accomplishments are amazing.  He is a record-breaking, hit producing, ball player that ranks with the sport’s all-time greats.

I am proud to say that one of the greatest memories from watching baseball with my dad in my youth was watching Pete Rose collect hit number 4,192 of his career.  That moment on the field, and that memory formed in my living room as a 9-year old kid, lives with me today more than 25 years later. 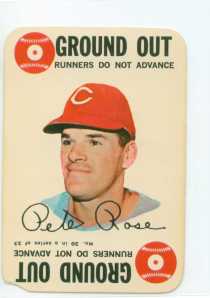 Many know him for his tenure as skipper of the Dodgers, Mets, and Cardinals.

I was first introduced to Joe Torre as the leader of the Atlanta Braves.

Most importantly, Joe Torre was a solid teammate.  Players that suited up alongside Torre thought the world of him and his attitude towards the game.  Torre played hard each and every day, and he was a great role model for the younger players.