Reggie Sanders – Sanders did not play in the major leagues during the 1975 baseball season. 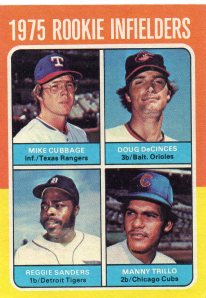 John Scott – John Scott appeared in 25 games with the Padres in 1975.  He had 9 at-bats during the season and did not connect for any hits.  He did score 6 runs for the team and stole 2 bases in a pinch-runner role. 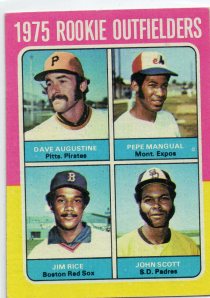 While not purposely seeking out these cards, there was no way that I was going to pass them up either.

Billy Hamilton is one of the most exciting young stars in the game and I have watched him become an even better player as the season has progressed.  His skills on offense always revolved around his ability to run, but now he has become a good hitter.  Not yet great, but definitely good.  And from there, he uses his wheels to make things happen and put runs on the board for the Reds.

I hope to see even more improvement from him in 2015 as he gets more comfortable at the plate and with his role as the leadoff hitter and offense generator. 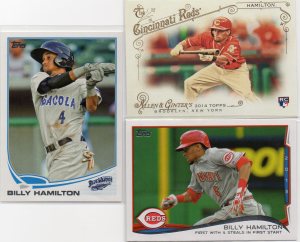 And if I can find more cards of Hamilton in that price range, I will do it again.

He’s got my vote for the NL ROY.  Does he have yours too?

I am very interested to see how Ian Kinsler plays during the upcoming 2013 baseball season.

Hopefully his ankle is ready for the demands of a 162-game season.  And with a changed offensive line-up, I am eager to see how the Rangers utilize his skills as he is one player that can fill quite a few roles for their team. 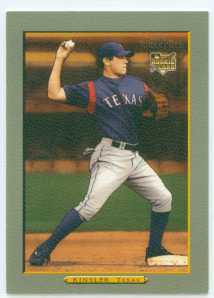 He reminds me a lot of Joe Morgan – I believe that their skill sets are very similar.  And I also believe that there are not very many 2B’s in the league today that can do what Ian does on a regular basis.  The only one I can think of off of the top of my head is Dustin Pedroia.

This is not the start of an Ian Kinsler collection, but I was not going to pass up buying his rookie card for $0.50.