Notes From Career:  Wayne Garrett played for the New York Mets and the Montreal Expos during his 10-year major league career.  He is a lifetime .239 hitter with 786 career hits in 1,092 games played.  Garrett is a member of the 1969 World Series champion Mets. 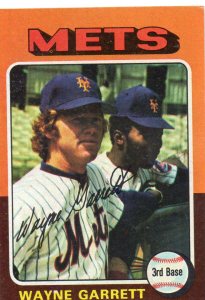