It’s time to take it back to the squared-circle…

And this time around, we’ll be talking tag-team wrestling.  Some of my favorite wrestling memories from my youth come from tag team action, as there was a period in the 1980’s when the teams were more entertaining than the singles action.

As you can imagine, and if you know me or the blog, most of my favorites come from my youth.  Actually, more than 90% of them are teams from the 80’s and 90’s.  Today’s tag-team scene is just plain awful if you ask me.

10 – The Rock & Sock Connection.  Taking two of the sport’s biggest stars and teaming them together was probably not the best idea.  And to be honest, they were far from impressive as a single unit.  But, getting these two guys in the ring together with microphones in hand and you have a comedic journey worth watching. 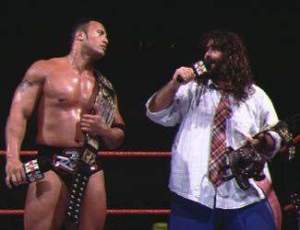 9 – Harlem Heat.  Way before Booker T became a solid singles wrestler, he was a dominant tag teamer with his ‘brother’ Stevie Ray.  The guys worked great together in the ring, but had horrible mic skills.  The time Booker spent in the tag-team scene seems to have paid off as he became an A-list solo performer afterwards.

8 – The Mega Powers.  Teaming Hogan and Savage was probably good for ratings, but personally I love these guys as foes versus friends.  Yet you cannot deny the star power of ‘The Mega Powers’. 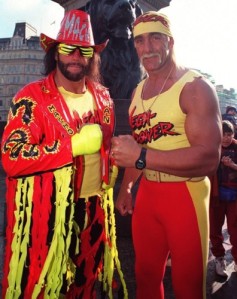 7 – Brutus Beefcake & Greg ‘The Hammer’ Valentine.  Two great wrestlers that performed very well together.  And their string of titles runs backs up that fact.  Before microphone skills were mandatory, these two guys were as solid as it got.

6 – Iron Shiek & Nikolai Volkoff.  These two are the first ‘bad guys’ that I remember.  And I have a ton of memories of listening to and then trying to repeat the Russian national anthem.  Way before the NWO, it was Volkoff that was getting pounded with cups of beer when on the mic. 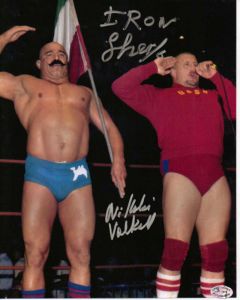 5 – Rock ‘N Roll Express.  A team designed to get the girls excited, I have to admit that I enjoyed watching this high-flying duo work in the NWA and WCW.  Set aside the bright colors, flashy ribbons, and Morton’s blond hair – these guys were great together in the ring.

4 – Steiner Brothers.  Way before Scott became ‘Pump’, the Steiners were a hell of a team.  Boasting the perfect blend of speed and power, these guys performed some amazing moves as a duo – and their suplexes were crazy!!

3 – The New Age Outlaws.  Known more for their antics than their wrasslin’ ability, Jesse James and Billy Gunn were solid compliments to DX.  The feuds were intense and their dominance in merchandise sales may never be seen again. 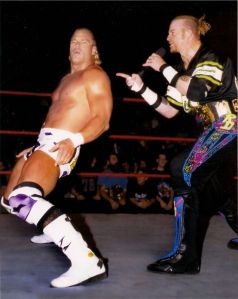 2 – Arn Anderson & Tully Blanchard.  Simply stated, these guys kicked butt.  Everyone’s butts for that matter.  The protector’s of the Four Horsemen’s legacy, both guys had the ability to dominate their opponents without flash.  Their in-ring skills were top-notch and most of their opponents left the ring as injured losers of the match. 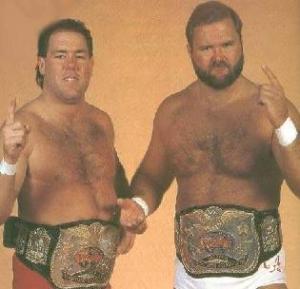 1 – The Hart Foundation.  Loved these guys as I recall watching them from the start through until Bret Hart became the star of the show as a singles wrestler.  Bret and Jim Neidhart were like a machine – perfect timing and never skipping a beat.  They beat teams bigger than them, faster than them, and stronger than them.  And they always made the crowd roar – whether good or bad! 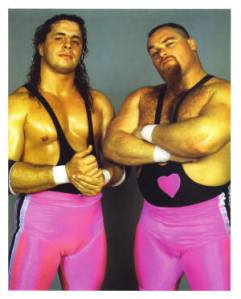 Man, that was fun to do.  I really wish that today’s version of the sport allowed for teams to be built and not formed.  Way too often, former ‘main-event’ talent is forced to work together just to keep the guys active.  If the WWE spent more time on creating these teams with fresh talent, and then let several of them create their own storylines, I think that they could easily regenerate what used to be a very valuable and fun part of their talent rosters.

What do you think?  What is your favorite tag team of all-time?

Ok, I am ready for the third installment of this series that hits “30-YOC” every Sunday night.

Going forward, there will be a slight twist – I am going to be adding a category of honorable mention to the list of Top 10.  Frankly, this process has been a lot of fun for me and as I think of new topics and then the contenders for those topics I am oftentimes coming up with more than 10 worthy selections.

To preface this list, I did a little homework and my list consists of guys that wrestled in the 1980’s or debuted during the 1980’s.  They may not have had their greatest successes or failures during that time, but I consider all of these guys as ‘Wrestlers Of The 80’s’

#10 – King Kong Bundy – Such a fun villain, he really embraced that role.  And while pretty limited from a technical standpoint, his forceful moves made him a fun main-eventer to cheer for or against.

#9 – Dusty Rhodes – Great on the microphone and fair in the ring, Dusty was around for twenty years prior to 1980, but he was still a very high profile talent whose ‘Atomic Elbow’ would knock you into next week. 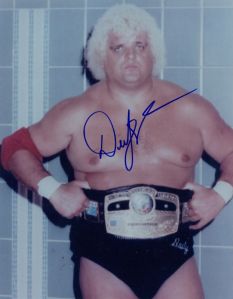 #8 – Lex Luger – Luger had the greatest debut that I recall from my youth.  I had never seen so much attention paid to a newcomer like it was for Luger.  With a physique that was unmatched, if he had better skills on the mic, he could have been the best.

#7 – Hulk Hogan – As a kid, I wouldn’t consider myself a ‘Hulkamaniac’ but I absolutely respect everything he did to propel the popularity of the sport.  His in-ring presence and ability to control 20,000 people with his actions is unparalleled.

#6 – Arn Anderson – So underrated, Arn Anderson is one of the best technical wrestlers that I have ever seen.  Great in both singles and tag-team action, Anderson provided a great fight each and every time he entered the ring.  Always a bridesmaid, and never a bride, Anderson did not have the looks or personality to carry a heavyweight championship, but he definitely had the skill. 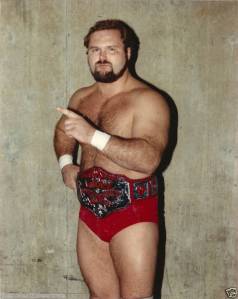 #5 – Ricky ‘The Dragon’ Steamboat – Like most kids, I took karate lessons as a youngster.  It was cool to see Ricky use some of the same moves I learned in his matches.  He was fun to watch, was great off the top rope, and had some very intense rivalries during his days. 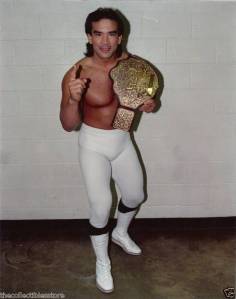 #4 – Shawn Michaels – I have watched his entire career, from start to finish.  And while I was not a fan of his during his early years, Shawn Michaels became an incredibile performer.  His in-ring work got so good, you could tell that he was extremely dedicated to his craft.  His teaming with ‘Degenration X’ and rebelious ways made being a bad guy fun!

#3 – Bret Hart – Easily the best wrestler that I have ever seen.  His skills were sharp from the moment he entered the ring, it’s a shame that so much of his early years were spent in tag-team action against lesser competition.  Hart’s personality was not the best, but he was good enough on the mic to warrant lengthy title reigns.  And the fact that he competed well against opponents of all sizes is a true testament to his unsurpassed skill level.

#2 Ric Flair – The ‘Nature Boy’ had it all.  Tremendous in-ring skill, and the best performer when in front of the cameras.  He was the perfect bad-guy, and when I was watching him as a kid, he made being bad so much more fun than being good.  The confidence that Flair displayed in his talent took him a very long way – and when he got his Blond hair all bloody, it was priceless.

#1 Randy “Macho Man” Savage – I was captivated by Savage the first time I saw him on TV, and only part of it was due to Ms. Elizabeth.  When Savage would leap from the top rope and drop an elbow on his opponent, he soared!  A very skilled wrestler, and equally talented with the microphone in his hands, Randy Savage mixed in just the right amount of crazy that kept you on the edge of your seat.  From intense battles with Hogan, Flair, Steamboat, Warrior, and more, I cheered Savage like I cheered no one else.

But for now, I will leave you with a glimpse into next week’s list – ‘Top Ten Actors’

What can be said about the man that put the entire wrestling industry on his back and carried it through the 1980’s?  Hulk Hogan is an absolute legend and what he did for professional  wrestling will always make him a fan favorite.

As a kid he taught us how to train hard, say your prayers, and take your vitamins.  As a young adult he taught me how to ‘give the finger’ to authority.  And as a young father he has taught me how to stand by and enjoy each and every moment that I can with my children.

Thank you Hulkster for making such a strong and powerful impact on my life.  I am a Hulk-a-Maniac and I will be for the rest of my life!!! 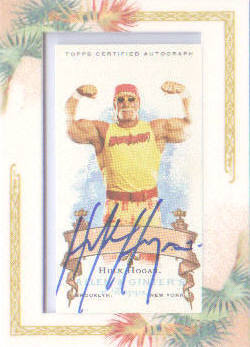 There is great debate as to whether this is or is not the ‘Real’ King Kong Bundy.  After watching this video a few times, I am starting to think that it is not him.  But what do I know?  I haven’t seen KKB in more than 15 years – a lot can happen to a man in that length of time…

I wonder if he wears that unitard everywhere he goes.  🙂

So is it him or not?  Let me know what you think.

Here is one of the biggest stars in the wrestling industry throwing out the first pitch at Wrigley Field.

John Cena, while he is a superstar, is not my kind of wrestler.  His ‘Superman’ persona doesn’t fit with the kind of guy that I like to cheer for.  Give me a technical wrestler or a guy know for high-flying, high-impact moves any day!!!

Although small in stature, Rey Mysterio, Jr. has been a top-performing wrestling superstar for years.  His skills in the ring offer the rare combination of speed and danger and cannot be pulled off by many of today’s top performers.

This video is of Rey throwing out the first pitch from a Cincinnati Reds baseball game.  Enjoy!!

I wonder if he sleeps with that mask on…  Hmmmm….

Does Vince McMahon Have His Eyes On Major League Baseball???

He tried to tackle the NFL with his XFL a decade ago.  Does Vince McMahon have his eyes focused on Major League Baseball now???  Watch out Selig, Vinny Mc has an elbow drop with your name written all over it!!!

Check Out What I Found…

While going through my ‘junk drawer’, I came across a bag full of old ticket stubs and pocket schedules that I have saved over the years.

This is quite a find.  I’ve got tickets from concerts, baseball games, wrestling matches, basketball games, and a bunch of small souvenirs like pins and magnets and programs.

I am going to sort through this stuff in the coming days and see what I find…  I’ll share the results with you.  Stay Tuned!!!