Not only did he make his major league debut in 1989 with the Chicago Cubs, but he also won the NL Rookie of the Year award that year while also helping the team capture their division crown!

At 23 years old, Walton had the presence of a veteran at the plate.  And his skills shined brightest in that rookie campaign.  Led by a batting average of .293, Walton collected 139 for the Cubs.  He also stole 24 bases, scored 64 runs, and drove in 46 more.  And he did all of this while patrolling one of the toughest center-field positions in the majors!

Congratulations on a fabulous rookie season Jerome.  Today we celebrate you winning the NL Rookie of the Year award in 1989!!! 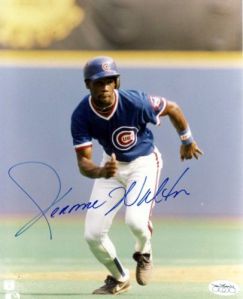