I was very happy to find Joe Morgan’s name on the subset checklist from the A&G ‘Pastime’s Pastime’ issue.

I kind of feel like Morgan is one of the forgotten HOFers as he does not tend to get into as many sets as some of the other stars of the 1970’s.

So, when I saw his name on this checklist, I immediately sought out an image of the card.  And then a place to buy.

The card is far from spectacular as I don’t care for another recycled image of him, but I will take what I can get.

Any time that I can find modern cards of Joe Morgan that feature his sporting his Houston Colt .45s or Houston Astros uniform, I gravitate towards them.

And more often than not, I try to add them to my collection if the price is agreeable.

Well, I have found another one.  And it is a true beauty! 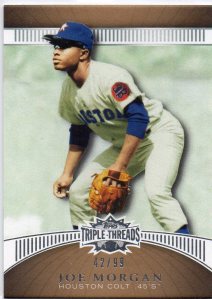 This card of Joe is from the 2010 Topps Triple Threads baseball card set.  And as you can see, the card features a very young Morgan wearing his old Astros uniform while fielding at second base.

I love it!  The colors are great, and that old uniform is a superb throwback to the mid-1960’s.

This card is the Sepia version of the base card.  Each Sepia card from this issue was limited to just 99 copies.  Mine is stamped as #42/99.

I’m very excited to have picked this one up for my collection!  A great addition, for sure!

I don’t know what it is about the Topps product that was issued in 2000, but for me, it is certainly not worthy of the Topps stamp.

Sure, there may be a few nice cards scattered throughout their releases that are copy written as produced in 2000, but when compared to cards issued the following year, 2000 is a stinker.

This card of Joe Morgan from the 2000 Topps Stars set is just one of many examples. 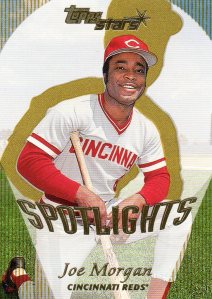 It is so hard to identify what the theme of this card really is.  I get the ‘Spotlight’ theme and the shadow cast behind Morgan as it there was a spotlight being shined on him.

But, what is with all of the thin vertical lines that run throughout the card’s background?  What is the purpose of them?

If Topps had shifted the Spotlight design to a top-corner of the card and shined down on the player with a bright light while having faint and muted light around the main focus, that could have worked better and made more sense.

But this one just plain stinks.

Joe Morgan’s debut in the baseball card collecting world came in 1965 via a multi-player rookie card.  He and his teammate at the time, Sonny Jackson, share the card and both men were rookies for the Houston Colt .45s.

The 1965 set features a classic design, and a very popular team banner that proudly waves with the team’s name.

The coloring of this card works very well too.  The Grey frame that surrounds the images of both players looks great with the Navy and Orange caps that both players are wearing.

And that Yellow flag is a great exclamation point to the card!!! 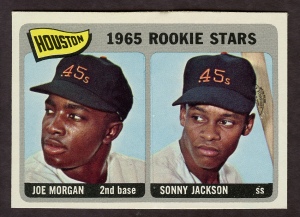 I’m so happy to have one of these in my collection.  A true gem!!!

Far from artsy and built with a lot of flare, Morgan’s signature is easy to read, and it can be made out without much strain on the eyes.

I have a signed Joe Morgan baseball in my collection, and it is one of my favorite signed balls.  I keep it with my other Reds signed balls from the ‘Big Red Machine’ era – and it sits proudly on top of that set! 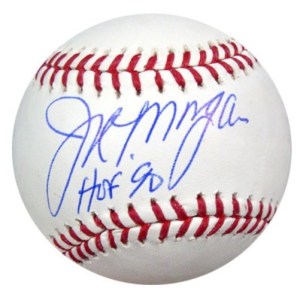 Joe Morgan And The Hall Of Fame Class Of 1990

Joe Morgan And The Hall Of Fame Class Of 1990

Joe Morgan was elected to the National Baseball Hall of Fame in Cooperstown during his first year of eligibility in 1990.  Morgan captured 363 of 444 votes cast for election, an 81.7% vote.

Morgan was elected with another first-time candidate, Jim Palmer of the Baltimore Orioles. 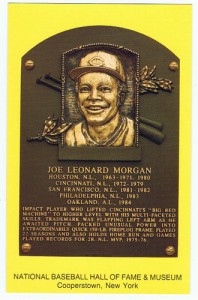 On September 7, 2013 the Cincinnati Reds unveiled a statue of legendary Reds player Joe Morgan.  The statue will greet fans as they enter the main entrance of Great American Ballpark.

Morgan is beloved in Cincinnati, and a valued member of the franchise’s history.

Morgan was previously honored by the Reds on June 6, 1998 when they retired his jersey number ‘8’.

Here are some pictures of the statue unveiling outside of Great American Ballpark: 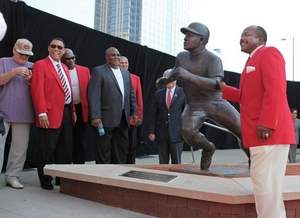 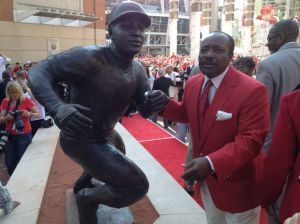 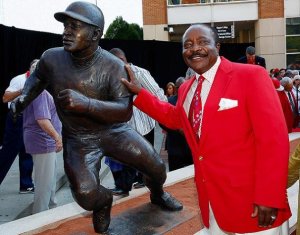 Joe Morgan appeared in 7 different postseasons.  Of them five were with the Reds, and four led to appearances in the World Series.

Morgan’s performances were not up to his standards, but he did amass as .347 on-base percentage in 23 World Series games while scoring 14 runs and driving in 8. 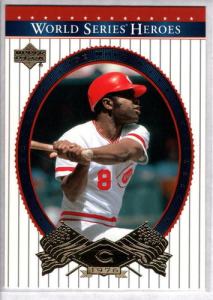 Joe Morgan Is Your 1975 & 1976 National League Most Valuable Player

Joe Morgan Is Your 1975 & 1976 National League Most Valuable Player

The fact that Joe Morgan was able to capture one, let alone two, MVP Awards during his tenure with the ‘Big Red Machine’ is an amazing accomplishment.  After all, the team was loaded with superstars and future Hall of Fame players.

So, for any one player to stand out enough while playing on that squad to earn the recognition as the Most Valuable Player is a very commendable achievement.

Morgan’s numbers from the 1975 and 1976 baseball seasons were superb. 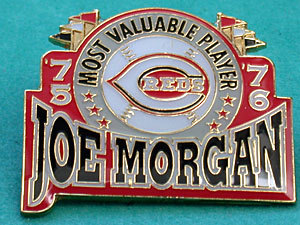 Joe Morgan Was An Elite Base Runner And Run-Scoring Machine

Joe Morgan Was An Elite Base Runner And Run-Scoring Machine

During his 8-year stretch with the Reds from 1972-1979, Joe Morgan elevated his game and began to dominate the opposition in multiple ways.

His best assets?  His feet and his baseball smarts!!

Joe Morgan was an extremely disruptive base runner.  When on base, he would often draw multiple throws to the base he was on, taking the pitcher out of sync.  He was so successful at stealing bases that he often drew no throw at all.  Morgan stole 689 bases during his career, 406 of which came in 8 seasons with the Reds (50 per year average).

All of the havoc on the bases caused Morgan to score hoards of runs too.  He scored 1,650 times during his big league career, 816 of them coming during his days with Cincinnati (100+ per year average). 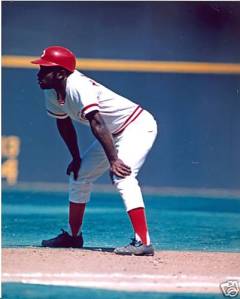