I have to admit that of all of the subsets that I have assembled myself in the last year, this one was by far the easiest to complete.

When I decided to go after this one, I found one seller on www.sportlots.com that had all of the pieces I needed to get the job done.  So, after quickly throwing them into my cart, I soon had the set complete without breaking a sweat.

From Ozzie Smith to Pete Rose to Mike Schmidt to Johnny Bench to Steve Carlton.  The list goes on and on.

But the set stops here – COMPLETE!!!

Kansas City, Missouri, October 5, 1980.  Royals’ leadoff hitter Willie Wilson has become the first player in major league history to top the 700 mark in official at-bats in a season.  Willie came to the plate 705 official times in 1980 to establish a new all-time record in that category.  The former major league mark was held by Dave Cash of the Phillies who batted 699 times officially in 1975.

My take – Eclipsed by Jimmy Rollins in 2007, Wilson sits in second place today.

San Diego, California, October 5, 1980.  Padres’ fielding whiz Ozzie Smith has entered his name in the record books in 1980.  The ‘Wizard of Oz’ was credited with 621 assists at shortstop last season establishing a new all-time record in that department.  The former mark of 601 assists in a season by a shortstop was set by Glenn Wright of the Pirates in 1924.

My take – The ‘Wizard’ made kids pay attention to playing defense.  Tons of us wanted to play shortstop because of how cool he made it!!!

Phillies’ slugger Mike Schmidt led the major leagues with 49 home runs in 1980.  In the process he broke the all-time mark for round-trippers by a 3rd baseman.  The former record of 47 4-baggers was set by Eddie Matthews of the Milwaukee Braves in 1953.  Mike is especially proud of his 48th and final blast of the regular season as it came in the 11th inning and won the game which gave the Phillies the NL East pennant.

Phillies’ first baseman Pete Rose has added another record to his ever-increasing collection.  Nicknamed ‘Charlie Hustle’, he topped the 600 mark in official at-bats in 1980 marking the 13th consecutive season that he reached that plateau.  The former major league record of 12 consecutive seasons was set by Nelson(Nellie) Fox of the White Sox from 1951 through 1962.

Montreal, Quebec, October 5, 1980.  Expos’ speedsters Ron LeFlore and Rodney Scott have completed the 1980 season with 97 and 63 stolen bases respectively.  As a result, their combined total of 160 thefts has established a new major league record for the most stolen bases by teammates in a season.  The former record in this category was 148 swipes by Lou Brock and Bake McBride of the Cardinals in 1974.  Brock’s total of 118 stolen bases that season still stands as the individual record.

My Take – I can guess why today’s stars don’t put more emphasis and heart into stealing bases.  But I have to say that when watching games today, base stealing is one of the things I moss most that I found to be an enjoyable part of the game during my youth.

Montreal, Quebec, September 10, 1980.  Exops’ righthander Bill Gullickson fanned 18 Chicago Cubs in pitching Montreal to a 4-2 victory tonight.  He thus became the first rookie in major league history to fan as many as 18 batters in a single contest.  The mark for a 9-inning game is 19 whiffs held jointly by Steve Carlton, Tom Seaver, and Nolan Ryan.  Those who’ve fanned 18 in 9 innings include Bob Feller, Sandy Koufax, Don Wilson, Nolan Ryan, and Ron Guidry.

My take – Some very serious company that Gullickson joined here.  And although the record did not last long, it is an amazing accomplishment by any rookie!!

Philadelphia, Pennsylvania, October, 5, 1980.  Phillie’s southpaw Steve Carlton has completed the 1980 campaign as the all-time ‘Strikeout King’ among lefties.  Steve led the National League with 286 strikeouts in 1980 giving him a lifetime total of 2,969 whiffs.  The former major league record for southpaws was 2,832 strikeouts by Mickey Lolich from 1963 through 1979.

The story – Cincinnati, Ohio, October 5, 1980.  Reds’ catcher Johnny Bench has finished the season as the all-time leading slugger among backstops.  Johnny belted 23 round-trippers while catching in 1980, giving him a lifetime total of 323 4-baggers while wearing the ‘tools of ignorance’.  The former major league record for home runs by a catcher was 313 held by Hall of Famer, Yogi Berra. 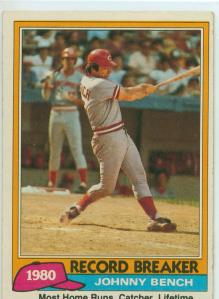 30 years later – Bench ended his career with 389 home runs; 326 of which were hit while catching in the game.  The game’s new leader is Mike Piazza who hit 427 career home runs, 396 of which came while catching.

The 1981 Topps ‘Record Breakers’ subset memorializes 8 incredible highlights from the 1980 baseball season.  Each week, on Mondays, I will present them to you.  And as always, I will let you know how this specific record stands almost 30 major league seasons later.