Of all of the prior Topps Heritage releases, I think that my favorite one thus far is the product from 2010 that replicated the 1961 Topps design.

The ’61 set means a lot to me as it features the card design that gave me (us) the Billy Williams and Ron Santo rookie cards.

And I also really dig the ‘Topps All-Star Rookie’ trophy that accompanies the card of Chris Coghlan.

Here is the full 9-card Marlins team set from that issue: 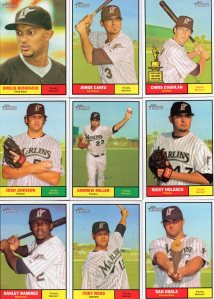 The card’s design allows for the large photo to take center stage.  And while all of the cards feature staged, posed photography, the unique poses of Cody Ross and Dan Uggla add just enough personality to the set to force a smile.

This is a sharp one!

For me, the best part of the ‘Golden Moments’ series that littered Topps 2012 Series 1, Series 2, and Update sets was the little gems of information that were uncovered about the players being featured.

Reggie Jackson has a few cards in the set.  This one is one that celebrates his early time with the Oakland A’s.

I’d say that was one heck of an afternoon!

One of my favorite former Marlins pitchers, Josh Johnson is preparing to start the 2014 major league baseball season as the ace of the San Diego Padres.  And he has all of the tools to succeed and lead the team.

But, his health has certainly stalled his progress.

After starting 31 games during the 2012 baseball season with the Marlins, JJ started just 16 in 2013 with the Blue Jays.  In order to take on a larger role with the team, as well as earn a longer contract and bigger payday, Johnson needs to start 28+ games for the Padres and keep them in contention deep into the games that he starts.

As someone that has gotten to see JJ pitch countless times, both live and on television, I have thought that he has had ‘ace’ stuff for some time.  His ability to dominate games from the onset, while allowing very few runs in the process, is rare.

I am hoping for a strong start to the 2014 baseball season for JJ, and an equally strong finish.

One of the most dominant and competitive pitchers that the game has even seen, Nolan Ryan was a player admired by many.  His hard work and dedication to his craft made him a very well respected player with his teammates, peers, and fans.

For any collector and baseball fan in general that was active in the 1980’s, we all have a Nolan Ryan moment ingrained in our heads.  For me, it was the speech I did in 10th grade about Ryan’s incredible feat of 5,000 K’s.  I actually had the game taped and used the strikeout of Rickey Henderson as the ‘ice breaker’.  It was pretty cool and I believe I got an A for the speech.  I remember saying something along the lines of ‘Nolan Ryan has done this 5,000 times.  Nolan Ryan did this 1,500 times before any of us were born.’

Anyways, ‘Happy Birthday’ to one of the game’s ultimate competitors!!!  Nolan Ryan is and will always be remembered as the guy that was unbelievably dominant yet was never rewarded with an individual honor for his pitching performances.

I have seen recent pictures of Ernie at various Cubs and baseball related events and he looks great!!  Still has the famous smile of his!!!

‘Mr. Cub’ will always be the most popular and respected player from the Chicago Cubs organization.  His 19-seasons of perfection in a Cubs uniform still remain as fond and vibrant memories for the ‘North Siders’.  Banks’ 512 career home runs and season after season of MVP caliber baseball earned him a Hall of Fame induction in 1977 on the first ballot.

Unfortunately Banks never played 1 single inning, never batted 1 time, never took the field 1 time in the playoffs.  For someone who means so much the sport of baseball and specifically to the city of Chicago, it would have been great to see Ernie Banks play when the games counted the most.

After analyzing the complete 2014 Baseball Hall of Fame voting results, it was Mike Mussina’s name that I was most shocked by with the final number of votes received.  Right behind Mussina, was Jeff Kent.

While never a superstar or household name, Jeff Kent was often regarded as ‘the best offensive player at his position’.  His stretch from 1997-2005 was superb.

On his first ballot, Kent received just 87 votes earning him 15.2% of the required 75% needed for election to Cooperstown.

So, where does Jeff Kent go from here?  Can he make up the vast ground that separates him and the needed votes to be elected?

Kent is the all-time leader in home runs hit for a second baseman with 377 career round-trippers.  When compared to all other second baseman in the Hall of Fame, Kent ranks in third place with 1,518 RBI behind Nap Lajoe and Rogers Hornsby.  His lifetime batting average of .290 is five points higher than that of Ryne Sandberg and nineteen points higher than Joe Morgan.

Kent was a 5-time All-Star and a 4-time Silver Slugger winner.  He was a league MVP in 2000 and had three other ‘Top 9′ seasons for the award.

What I think the biggest argument about Kent’s career is when his numbers soared.  He took his game to another level when he joined the Giants in 1997.  It may be coincidental that his performance accelerated when he started hitting in a lineup that featured Barry Bonds.  Maybe it was Bonds’ presence that allowed for Kent to do what he did in San Fran as he did not achieve the same output while with the Mets or Indians in prior years.

Nonetheless, Jeff Kent has a huge mountain to climb in order to get to the Hall of Fame.  By comparison, Andre Dawson received 45% of the vote on his first ballot in 2002 and Jim Rice got 29.8% of the vote in 1995.  It took both of these guys a pretty long time to gain enshrinement – and each of them started with a lot more votes than what Kent got in round one. 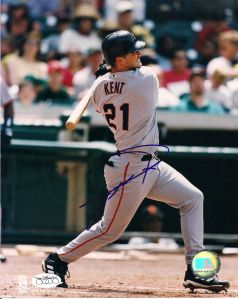 What do you think?  Can Jeff Kent take on this uphill battle and emerge victorious?  If so, how long will it take for him to reach 75%?

Let me hear it!

After grabbing the base card from this set of Andre a few weeks ago, I immediately wanted to see how many parallel versions of the card existed and be had affordably.

And it did not take long to see that there was a version of the card that was serial numbered and stamped to 500 copies. 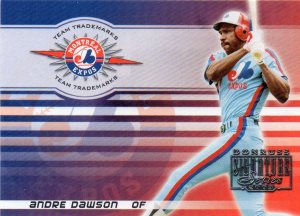 Still, there are more of these out there.  And I do intend on seeing if I can bring more into my collection.

Time will tell, but I believe that my efforts will have positive results.

After pulling the base card of Bryce Harper for my collection, I immediately sought out the colored parallels.

The end result was that I was not willing or wanting to shell out the kind of cash that they were fetching at the time.  But, lucky for me – my patience paid off as I waited a few more weeks and then tried my search again.

And now, I have the ‘Gold’ parallel from the 2013 Bowman Platinum set of Bryce Harper for my collection.  And the Gold background looks great!

Hopefully, I can nab another one of these beauties in the coming weeks.

Like many aging superstars that can no longer play the defense that they were once capable of, George Brett made the change to first base.

He did this sooner than most – and it began during the 1987 baseball season, his 13th year in the majors.

In 2,707 career games, Brett played first base in 461 of them.  During that span, he compiled a fielding percentage of .993.  And while he was never awarded a Gold Glove for his defensively ability at 1B, he was a serviceable aid to the Royals defense.

This card from the 1990 Donruss card captures Mr. Brett fielding his new position. 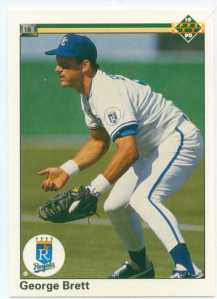 One of my favorite parts about the GQ subsets is that they don’t simply throw in the top players – they truly find incredible images regardless of the player’s star power.  What this does is introduce us to other talents that perform at high levels while also allowing for players that are not always in the spotlight a chance to shine for a bit.

The ‘Glove Stories’ set primarily features outfielders with 8 cards, and has 2 infielder cards as well.

This is the Mike Trout card from the set:

This play could easily be the most shown and watched highlight from the 2012 major league baseball regular season.  Between the ground covered and the height at which Mike Trout leaped to secure haul in the ball, the baseball world stared in awe.

And ever since this single moment, Mike Trout has taken more and more steps to becoming the face of major league baseball and a household name.