This is the Frank White card from the set:

White enjoyed an 18-season major league career – all with the Kansas City Royals!

He was a 5-time All-Star, an 8-time winner of the Gold Glove at second base, and a Silver Slugger Award winner as well.  White collected 2,006 hits during his major league career including 407 doubles, 58 triples, and 160 home runs.  He stole 178 bases during his career en route to scoring 912 runs and driving in 886.

White played in two World Series match-ups with the Royals, going 1-1 and winning the title in 1985.

With the base card of Jim Palmer from the 2013 Topps Allen & Ginter set already in my collection, it was time to go after the mini card and some of the parallels from the set.

The first one that I was able to score was the mini with the A&G special back.

And since you all have either seen the front of the base card or mini card before, I thought I would mix it up a bit and show off the lone stand-out part of this card – the back!

Kind of neat – and very detailed and intricate!

It seems that Fisk’s card either featured incredible action photography or shots like this one that show him posing for the camera. 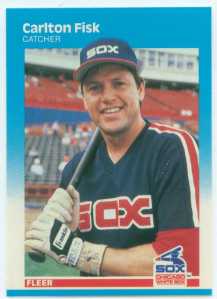 I will say that this one is not that bad.   I really like those old ‘SOX’ uniforms and the colors go extremely well with the 1987 Fleer baseball card design.

That old cartoon-ish ‘SOX’ logo in the lower-right corner is pretty sweet as well!!

This one gets a ‘Pass’ in my books…

On this day in 1992, George Brett collected hit number 3,000 of his amazing baseball career!!!

On the road playing the Angels, Brett’s Kansas City Royals teammates were playing in front of 17,000+ fans.  If the baseball fans in the Los Angeles area knew that history was going to be made on this day, I would have to imagine that more people would have been in attendance.

For the day, Brett put on quite a display of hitting excellence.  Going 4-for-5, he hit 1 double and 3 singles.

George Brett finished his Hall of Fame career with 3,154 hits and ranks as 15th in baseball history for career hits.

On this day in 1983, Jim Palmer secured the final win of his legendary major league career.

Getting the start in the second game of a double-header, Palmer was facing the New York Yankees at Memorial Stadium and in front of 44,000+ fans.

Palmer was his true vintage self in this outing.  He went seven innings and allowed just 2 hits and 2 runs versus the stacked Yankees lineup.  He walked three batters and struck out two en route to a 3-2 victory.

The win was the 268th and final victory of Palmer’s Hall of Fame career.

MIAMI — Henderson Alvarez opened the season on the disabled list, and the 23-year-old ended it by etching his name in Major League history.

In one of the most bizarre finishes to a landmark game, Alvarez completed his no-hitter by watching from the on-deck circle.

The Marlins completed the fifth no-hitter in franchise history in walk-off fashion, with Giancarlo Stanton racing home on a wild pitch in the ninth inning to secure a 1-0 victory over the Tigers in front of 28,315 at Marlins Park.

Alvarez was sensational, going the distance and striking out four on 99 pitches, but he didn’t know if it was good enough, because the Marlins hadn’t scored a run through eight innings.

That run eventually came on a wild pitch, prompting a wild celebration at home plate. Rookie Jose Fernandez literally took the jersey off Alvarez’s back and displayed it to the fans, who cheered one of the most memorable closing days in club history.

The drama built in the top of the ninth as Alvarez took the mound, with the crowd on its feet for every pitch. Pinch-hitter Alex Avila tapped back to Alvarez for the first out, and Don Kelly did the same, with Alvarez making a leaping play to snare the hot chopper.

Andy Dirks then drew a four-pitch walk, bringing up Matt Tuiasosopo. Alvarez, who entered the showdown at 89 pitches, ran the count full, and the crowd erupted when Tuiasosopo swung through a 95-mph fastball.

But it was an awkward moment, because despite pitching nine no-hit innings, Alvarez wasn’t able to celebrate, as the game was scoreless.

The Marlins finally broke through off Luke Putkonen. Stanton and Logan Morrison delivered one-out singles, and advanced into scoring position on a wild pitch. With the infield in, Adeiny Hechavarria — who helped preserve the no-hitter with a terrific leaping catch to rob Ramon Santiago of a line-drive single in the second inning — tapped a high grounder to short for the second out. Chris Coghlanwalked, bringing up Greg Dobbs, pinch-hitting for catcher Koyie Hill.

Putkonen’s first pitch bounced away from catcher Brayan Pena, and Stanton raced home and into a mob scene.

The Tigers hadn’t gone with their main lineup in this one, as manager Jim Leyland rested his regulars to get ready for the postseason.

Miguel Cabrera did not start, and Prince Fielder — one of only three Tigers to reach base, hit by a pitch in the first inning — was replaced after two plate appearances.

The Tigers came close to a hit in the sixth inning. Justin Verlander hit a long fly down the line in right field, but the ball landed just out of Stanton’s reach, and it was a couple of feet foul.

Verlander, now 0-for-26 in his career, eventually struck out looking.

What’s an obsessed player collector to do??

I’m not a big fan of cards that look like this.  But, I am a super-fan that is crazy about adding new cards of his favorite player to his collection.  And when said card features an autograph, even better – much better!!

So, my plan was simple: wait for a bargain.

But, when I found one listed with a starting price of $0.99, I saved it to my ‘Watched Items’ list and waited for it to come to an end.  On the day it was scheduled to end, it had one bid on it and it remained at just $0.99 (with $2 for shipping).

I guess that you could say that this card has used some kind of ‘Sepia Toned’ package to provide this look.

But for me, it just does not work…

A bit boring with the design, and no true graphics to speak of, the card is pretty bad.  I like the action and the image is not horrible – but I want to see more!  Zoom out and show me more of the game, show Morgan’s full bat, add a tad of Red coloring to Morgan’s sleeves, jersey, and helmet.

And while I normally don’t demand that all of my cards feature some kind of frame around the card’s image, I think that this one calls for one…

Keith Hernandez was awarded a card in the 1989 Donruss “Baseball’s Best” card set.

I like this one so much more than his base card from the Donruss flagship release of 1989.

I’ll take a nice action shot over a posed shot any day of the week!

On top of that, the coloring of this card is much lighter and has a lot more life to it.

As for Hernandez’ 1989 season, it was his last season with the New York Mets.  He was a part-time player for the Mets in that final year, appearing in just 75 of 162 games and hardly having the same impact that he had just a few seasons before when he was an All-Star.

On this day in 1996, Andre Dawson played in his final major league game capping a 21-season career.

Dawson and his Marlins teammates were on the road in Houston taking on the Astros.  Regulated to a bench role in his final season, Dawson did not make start in the game, but he did make an appearance as a pinch hitter.

Dawson did not get a hit, he popped out in foul territory to record the final out of his major league career.

The Marlins lost the game 5-4 and Andre Dawson’s career was over.  Dawson was one of the most well-rounded players from his generation – a guy that displayed all of baseball’s ‘5 Tools’ en route to being a Rookie of the Year Award winner, an MVP, an 8-time All-Star, an 8-time Gold Glove Award winner, and a 7-time Silver Slugger Award winner.

Congratulations on a fantastic major league career Andre.  And ‘THANK YOU’ so much for the amazing memories!!!