I recently added this card to my Wade Boggs collection.

It should look familiar to you as it is the exact same as Boggs’ card from the 1987 Topps baseball card set – with one lone difference (on the front).

Yep, that sweet O-Pee-Chee logo has replaced the Topps logo.

Look at that smooth and power-packed swing by Reggie on this shot used for his 2005 Upper Deck SP Authentic baseball card: 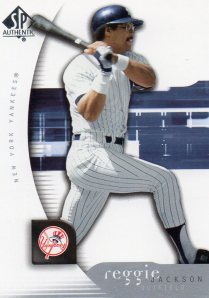 Full of power and speed, Reggie could mash with the best of them!

This card is neat in that the colors work well together.  However, I do find all of the random graphic elements to be a bit of a distraction.  I like the border on the left side, and the nameplate is fine (though a bit irregular).  The part that disturbs me is the graphic that runs horizontally right behind Reggie.  What is that supposed to be?  Personally, I would have liked to have seen a muted backdrop of Yankee Stadium behind #44 – keep it light and clean allowing Reggie’s image to stand out and be the centerpiece.

Instead, I feel like I am looking at an ink-blot, trying to find the butterfly…

Here is another card from the 1988 Topps All-Star send-in set that I have scored for my vintage player collection.  This time around, the card features Dave Winfield.

He definitely belongs in this set.  And in any other All-Star set issued in the 1980’s.

A great addition to my Dave Winfield player collection!

The Opening Day starting pitcher for the Arizona Diamondbacks in their inaugural baseball games as a major league franchise was Andy Benes.

The release of this set of cards must have escaped me as I had no idea this set was released.  It was a shopping venture on Sportlots.com that provided me with the news – and that means that the release was made of the set at least a few weeks prior to my purchase.

Anyway, I grabbed a small stack of cards from this 2014 Panini Elite Series 2 set.  All of the cards feature my modern PC guys.

And the first card I am ready to show off to you is of Nationals superstar, and 30-YOC favorite, Bryce Harper. 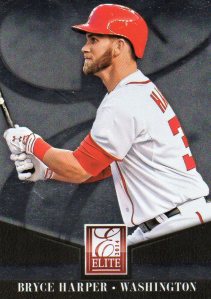 The style of the card is nice.  It has a very royal feel to it.  I like the ‘Elite’ logo and I really like how they used the same ‘E’ from ‘Elite’ in the background of the card, yet still allow for the player’s image to be the main feature.

I’ll show you some more of my buys from this issue over the next few weeks.  I think, like this card of Harper, that you will like them too.