Ozzie Smith was elected into the Baseball Hall of Fame in 2002.  With 91% of the votes captured on his first ballot, Ozzie was the sole member of the class of 2002.

His career spanned 19 years and 3 decades.  He compiled a lengthy list of amazing baseball accomplishments and earned the right to be classified as one of the game’s great players.

Ozzie was a 15-time All-star, a 13-time Gold Glove winner, and a World Series champion.  And while his offensive numbers may not be staggering, he certainly left a big impact on the game!!! 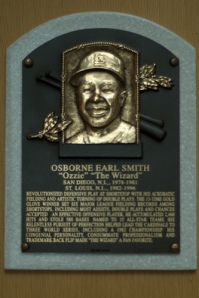 One response to “Ozzie Smith’s Hall Of Fame Plaque”